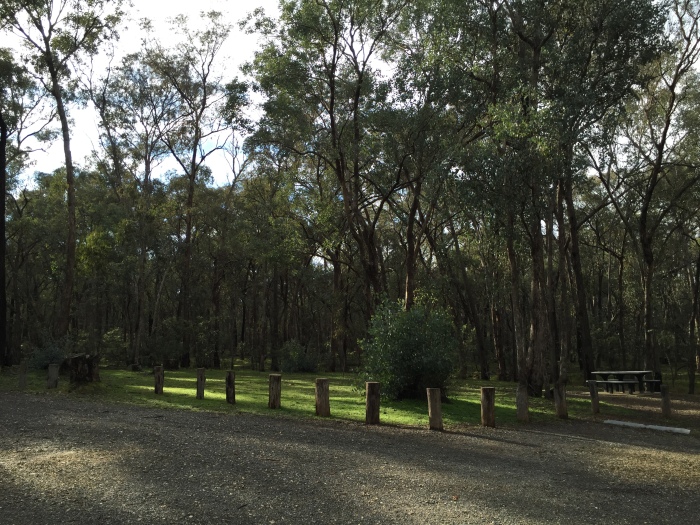 Rock ferns by the trail 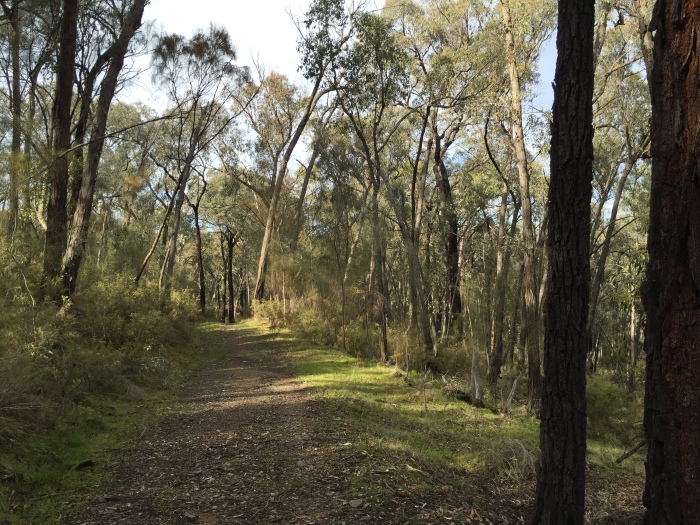 Ironbarks and gun trees as the track crosses a road

Small mushrooms pushing up through the gravelly trail 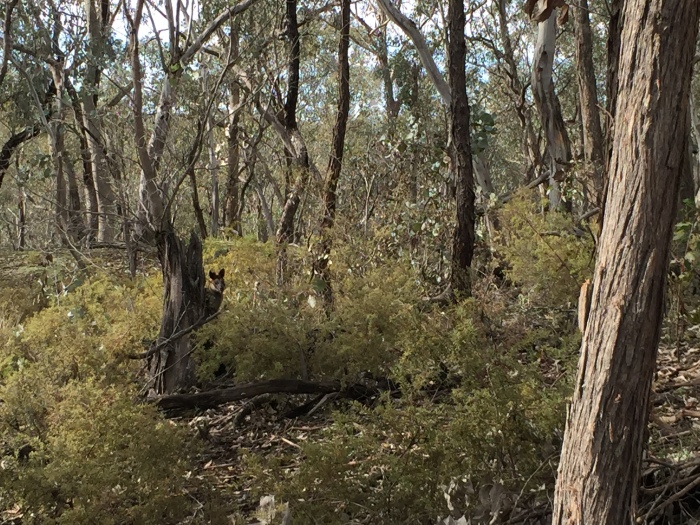 A wallaby staring back at us from the trees

The sparse undergrowth of the box-ironbark forest 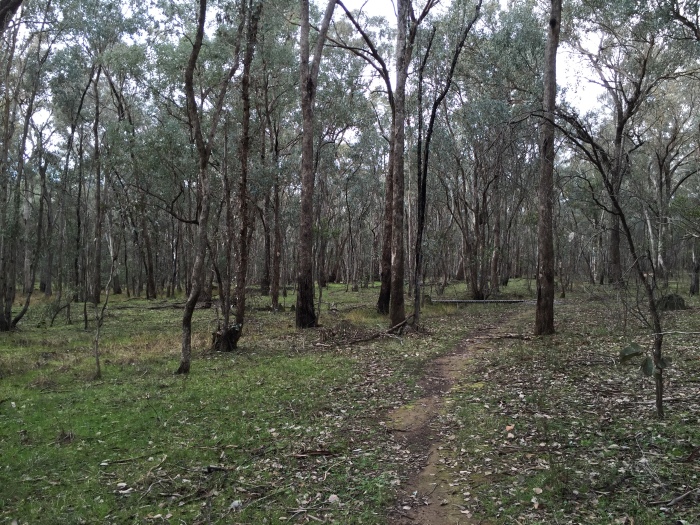 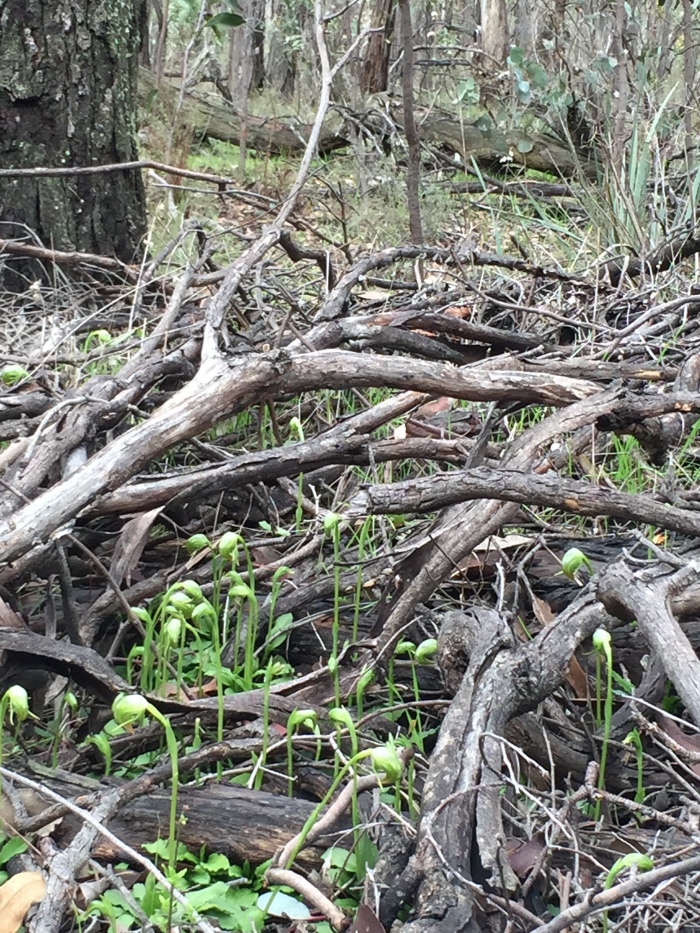 Greenhoods pushing up through the tangle of fallen limbs

A signposted ‘Quiet area’ by the track, where we stopped for a snack 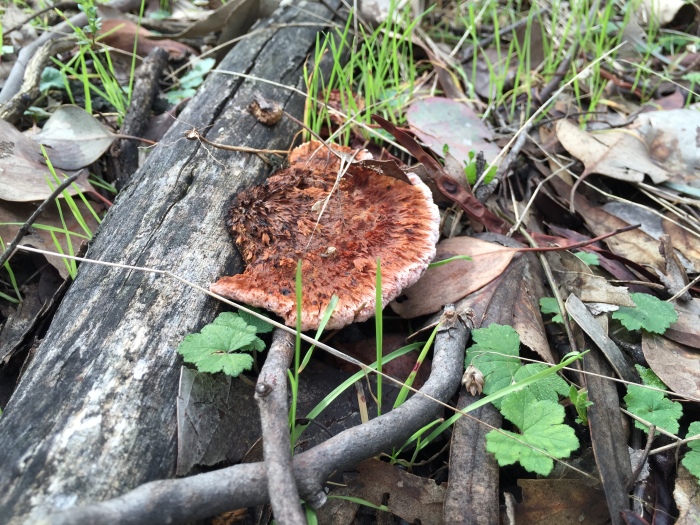 Bracket fungi in the Quiet area. It was a very quiet fungus.

More grassy areas… we stopped here, captivated by a group of Little lorikeets 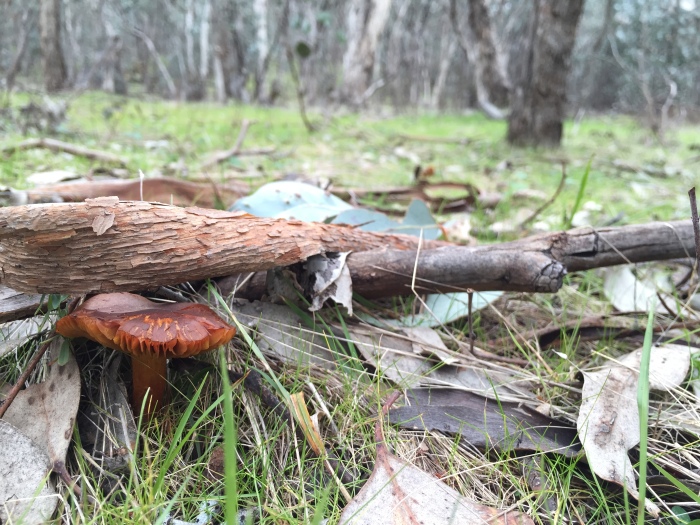 Another stand of mushrooms in the litter 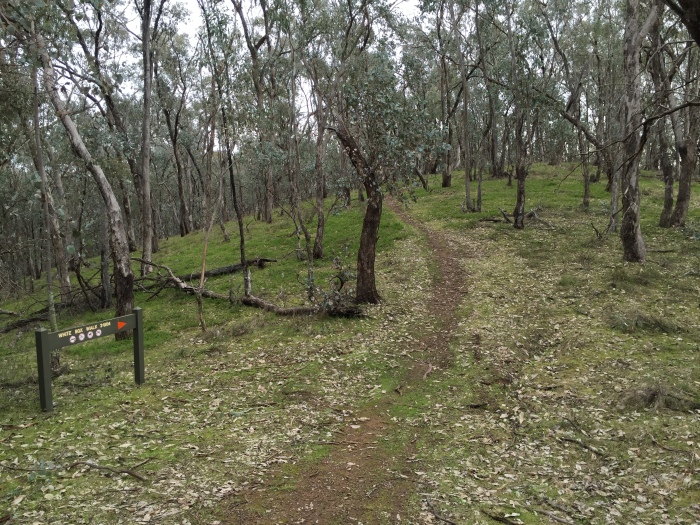 The track followed a ridgeline in the latter part of the walk, the hillside was covered in little rock ferns. 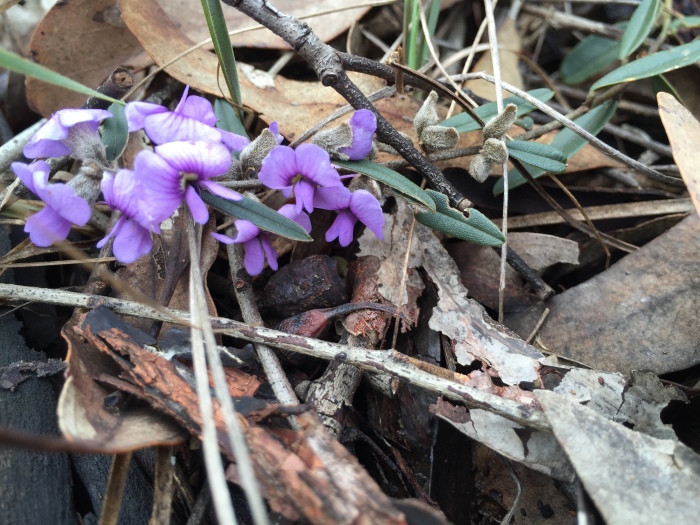 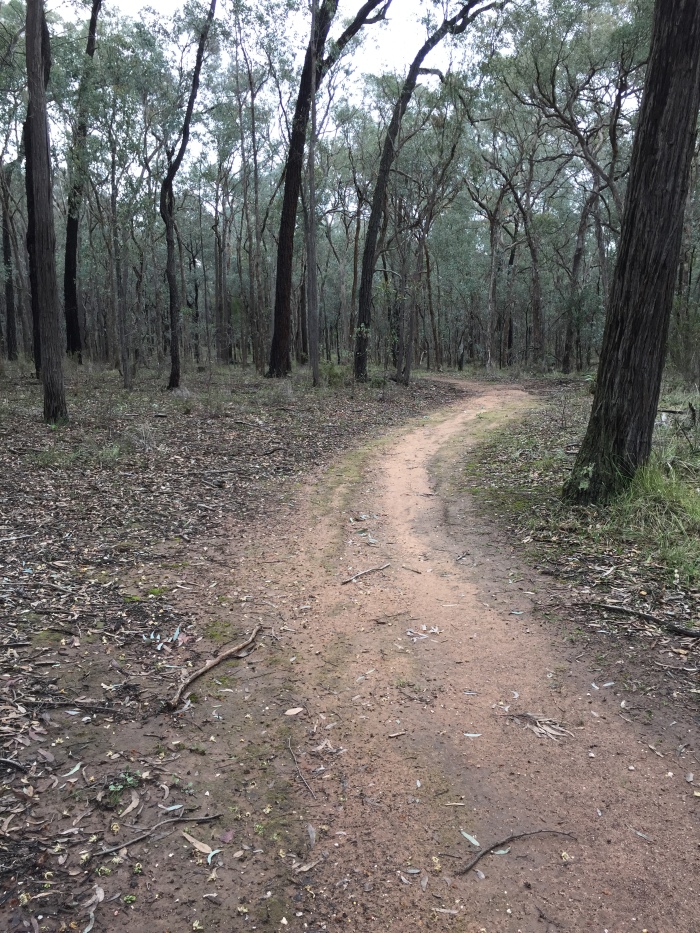 Track down to the carpark

How we got there: we drove to the Honeyeater Picnic area in Chiltern-Mt Pilot National park, from Bright (via Beechworth). Chiltern is about 3 hours by car from Melbourne, or about an hour drive from Bright. The Honeyeater picnic area where the walk starts, is just south of Chiltern.

Activity summary: A three hour, bird-filled circuit walk in box-ironbark forest. My guess is that we could have done the walk in two hours but as this was our only walk of the day, we took our time – and we stopped SO often to squint at birds flitting in the canopy. So many birds…

What we did (the details): We arrived at Honeyeater picnic grounds at around 10am and started off. I realised on the way there that I’d left the camera in our cabin back in Bright. DOH! So photos in today’s post are brought to you by my phone. Oh wells.

The trail the whole way was very clearly marked and even, it gently undulated but not steep hills. It was clearly signposted at every junction. Creeks were crossed by little bridges and there was only one slightly muddy spot on the whole walk. In other words, this was very comfortable walking that left lots of room for looking at our surroundings.

This was our first foray into box-ironbark forests in Victoria. I recently purchased a glorious book: Wildlife of the box-ironbark country and was excited to visit the Chiltern national park area as it promised to be very interesting. We weren’t disappointed.

The first part of the walk there were lots of remnant mining sites, and the walk had been re-routed at some point in the past due to a mine collapse. We certainly saw plenty of evidence of surface mining, but that seemed to be mainly concentrated on the northwestern part of the loop.

The forest itself was open, with a fairly high canopy. The only understory was the occasional acacia or cypress/pine, and the ground cover was mainly grasses, tiny ferns and low herby things. (A botanist I am not!) The character of the forest changed as we walked around the circuit, depending on whether we were in low gullies or up on the ridge lines, but throughout the whole park there were birds and kangaroos/wallabies. We even encountered one wallaby mum with quite a large joey in her pouch, which was lovely.

At about the two hour point we reached the signposted ‘quiet area’ where some logs have been set aside in a clearing off the track, and it’s suggested you stop and have a break. We did just this, munching on scroggin as the birds in the area hopped on the ground and up and down the trunks all around us. After break (and some surreptitious photos of fungi by me…) we were back on our way.

We were continually stopping to listen to bird calls we didn’t recognise, and peering up into the canopy to try and identify what we were seeing and hearing. We were rewarded on two occasions by spotting Little lorikeets: tiny parrots zipping through the canopy fanning their bright tails and chattering together excitedly. We also had a close encounter with a collared sparrowhawk: it zoomed down from the canopy into a low tree by the trail, then hopped up to a branch where we could see it clearly… before zooming off deeper into the trees… the whole thing heralded by constant alarm noises from the other birds nearby.

Other than the birds, the kangaroos, the beautiful and intriguing forest, our walk was uneventful… and extremely enjoyable. The birds listed in more detail below, as there were so many 🙂

Books: This walk is described by Melanie Ball in Top Walks in Victoria.