When we went: October 5, 6, 7 October 2015. This post will just cover the second full day, October 7. Day 1 is here.
How we got there: we drove to Kiata campground from Melbourne, it’s about 4.5 hours by car. The nearest town is Nhill.

Activity summary: camped overnight at Yellowgums, then 6 hour walk back to camp at Kiata.

With less than a litre of water left we knew we had to be up early to beat the heat and the flies. The alarm went off at 5:30am,  but it was still very dark. A soft ‘booboo, booboo’ called from the trees nearby, letting us know that it was still owl time, it was way too early to rise.

We waited for first light and reluctantly crawled out of our sleeping bags, dressed and started packing.

The morning view of… the dunny!

We packed our tent, used the ‘facilities’ and munched on our homemade breakfast bars. We each had a sip of CLEAN water, then shouldered packs at set off just before 7am.

I loved the Yellowgums campsite. The spot we chose to pitch our tent probably wouldn’t work in windy weather: the pegs were only lightly sitting in the sand. But there was plenty of shade and places to sit. There were birds around the whole time we were there, afternoon, night and morning. A kangaroo hopped through during the evening. It was a pretty place. It’s just a shame the tank and shelter exuded the death smell.

I packed the bottle of death water on the outside pocket of my pack, just in case. But we agreed that we would have to actually be dying to drink it. Still. Just in case.

Packing up, almost ready to set out

Walking out the way we came, we marvelled at how beautiful our surrounds were. We hadn’t noticed at all the afternoon before when we were hot and surrounded by a haze of pesky flies. Now in the cool morning air, the place was alive. Sunlight low over the scrub, galahs wheeling in twos and threes all around. Just stunning. The place glowed. 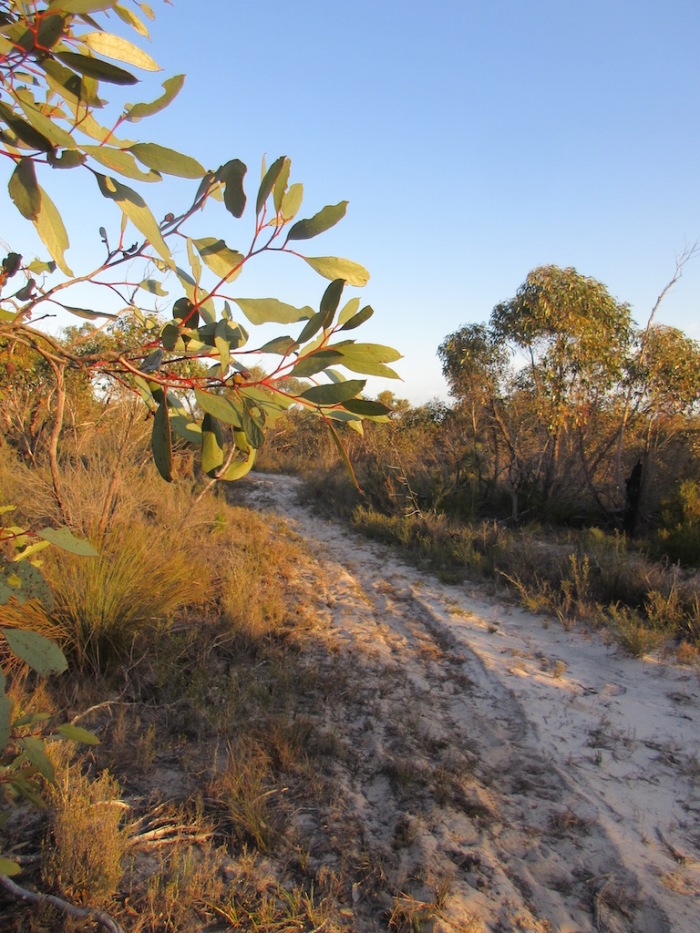 Morning sun through the yellow gums on the trail

Again as the sun climber higher we were met by the occasional dragon on the trail. This one didn’t want to move from her hole in the middle of the track.

But as we walked it got hotter, the soft sandy track seemed to be eternally uphill and we got thirstier and thirstier. 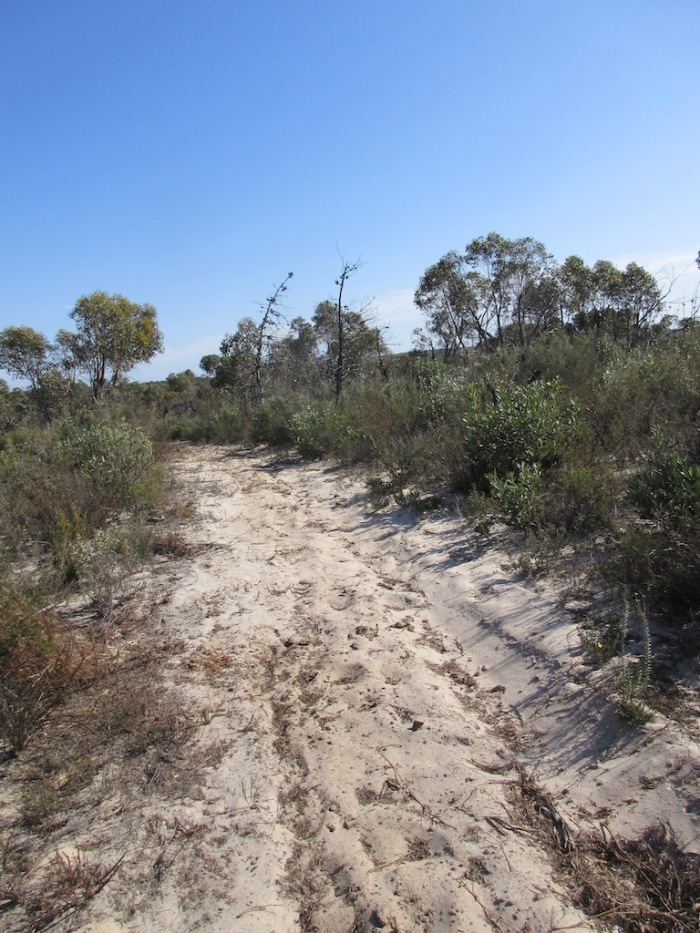 The sand, the endless sand.

We stopped at Salk Lake for a quick drink and a couple of jubes. I also needed a pit stop with a little spade well off the track.

There were no flies yet, but we were keenly aware of making sure we kept our pace up, so we rarely stopped to take photos… apart for the occasional wildflower that escaped us on the way out. 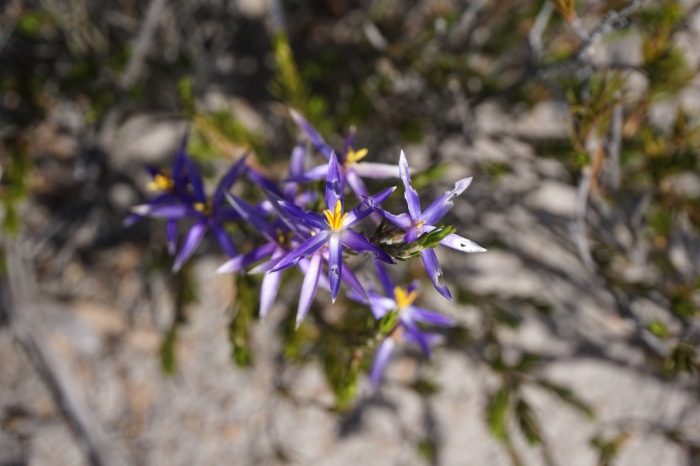 After leaving Salt Lake around 10:30 am, we took no more photos. We knew it was uphill all the way to the Trig point, and then downhill most of the way from there so we didn’t want to delay.

About halfway to Trig point, the flies really started to bug us. We sprayed our hats and packs with Bushmans, and continued on.

We knew we’d need the water as we climbed, so we decided to use up the last of our water at the top of Trig point. It was only 90min or so from there to our water can in our car, and even though it was hot we were sure it would be fine.

The climb up is through desert sheoak scrub. Dense and just tall enough to block all wind, but short enough to funnel in all of the sunshine onto the track and us as we headed north.

We stopped for 15min at the platform at Trig point for a little scroggin, a couple of jubes and downed the rest of our water. The cool breeze there after the hot climb was lovely. It even blew away some of our flies. We resprayed our gear and continued.

We marched the last 6 km down and back Kiata without speaking much. The flies got worse and worse as the day warmed up and we were like Quixote’s windmills keeping them at bay. We stopped looking around us and just concentrated on walking and swatting, just noticing familiar landmarks that meant we were closer… crossing the 4wd tracks, entering the fire break, passing the downed tree.

And then we could see the camp site, and the car, and everything was a rush. We downed our packs, opened the doors and up-ended the water into our bottles. And into us. We made it.

A quick wash, clean clothes, and we set off to Dimboola for some lunch and the road home.

When we got home, even after going through the dishwasher, my bottle still smelled like death. I bought a new one a few days later.

Books: This walk is described in Take a Walk in Victoria’s National Parks by John and Lyn Daly.