How we got there: we drove from from Melbourne, the closest town is Lorne, it’s about two hours by car.

We got to the Sheoak picnic area around 8:30am. The sun was shining, the birds were singing. It was a glorious morning. King parrots were low in the trees where we parked, and flew back and forth around us as we got ready for our hike.

We really enjoyed the walk last visit, back in May, but back then I really struggled with the second half of the walk. The descent down to Sheoak Falls means a very big climb out and then back up to the Castle Rock turn off. Plus, we’d already walked that day, as we’d camped the night before at Lake Elizabeth.

We decided this time, that as the main reason we were revisiting was to visit the Swallow Caves, we’d just head down to the cave and then loop back via the fire trail, skipping both Sheoak Falls and Castle Rock. Sheoak Falls are pretty, but the weather had been dry, so they were probably not going to be spectacular. And the Castle Rock lookout is nice, but we didn’t see the point of a second visit as it really just looks out over the caravan park.

Okay, so, complicated decision-making aside, we were going to do a short version of the walk. 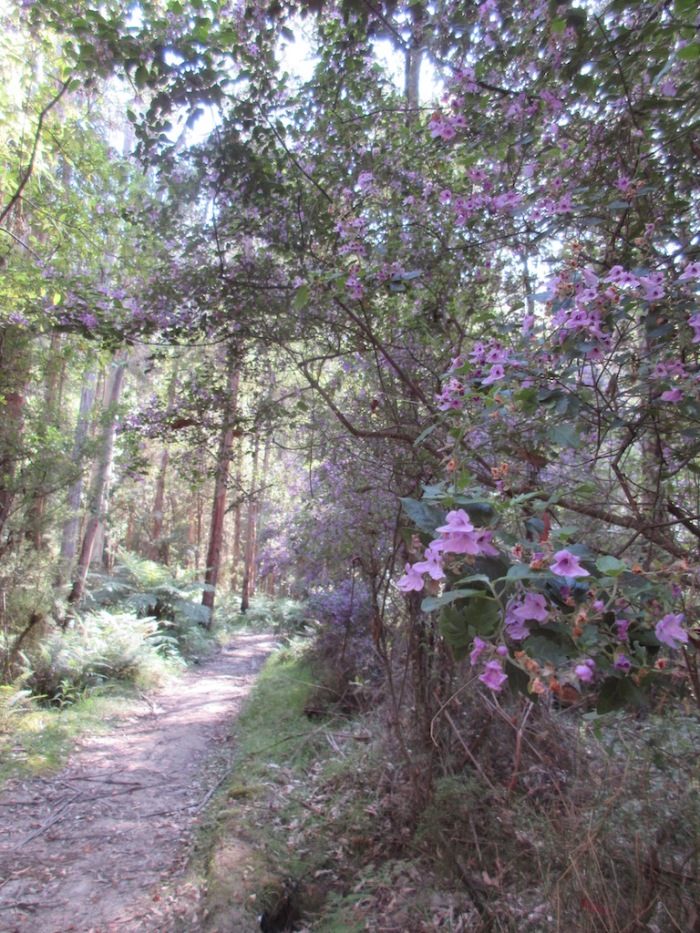 Spring time mean that the first half of the walk that follows Sheaok creek was stunning – there were wildflowers everywhere. The Balm Mint-bish in particular was spectacular: the understory was a carpet of purple.

We were only on the trail for about 10 minutes and we heard our first Gang gang cockatoo of the morning, creaking his call as he flew over us. He landed in the canopy ahead of us and tree-hopped as we walked past, keeping pace with us for about 15 minutes, calling as he flew each time. 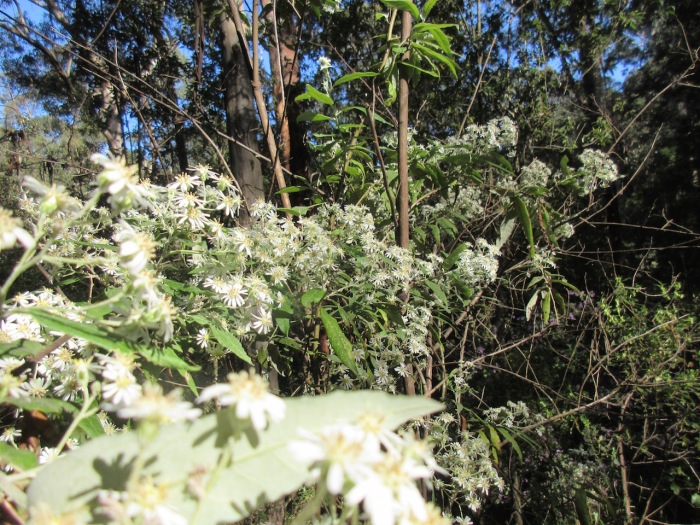 Sheoak creek was still gently flowing, bridges criss cross the stream, and the morning sunlight filtered down through the canopy. Birds called all around, and we were lucky enough to have a couple of close encounters with golden whistlers. We also heard a couple of owl-like hootings that we weren’t at all sure about.

We reached Swallow Caves, but there were only a couple of swallows. Maybe we were too late to see them. Or maybe there just weren’t many around this year – the mud daubed areas of the underhang looked pretty undisturbed. 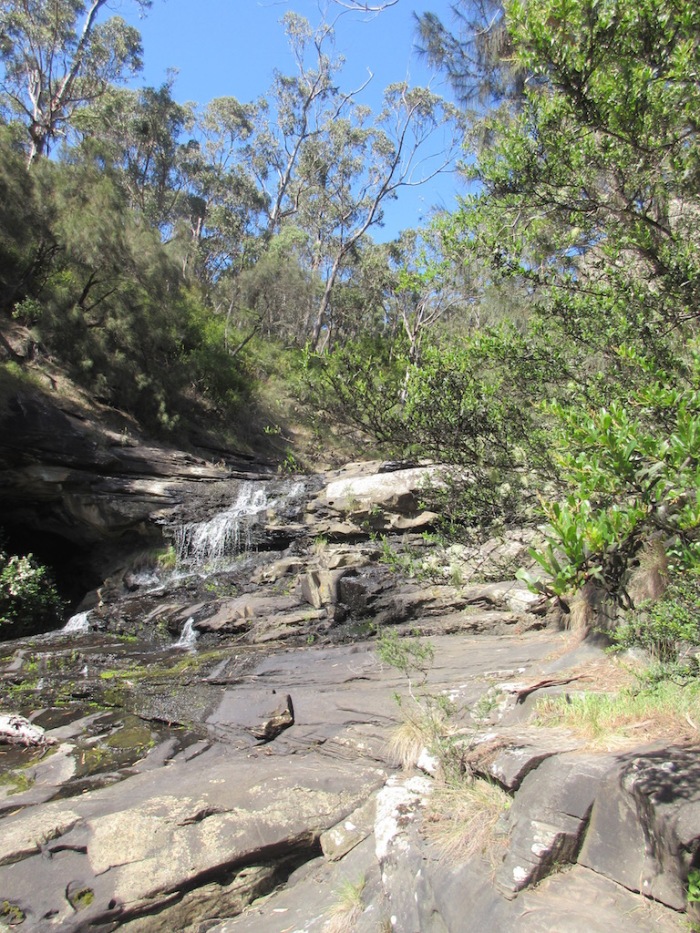 The top of sheoak falls

We headed back over the top of Sheoak Falls (still one of the prettiest places in the park, even in late Spring) and up to the Castle Rock turn-off. 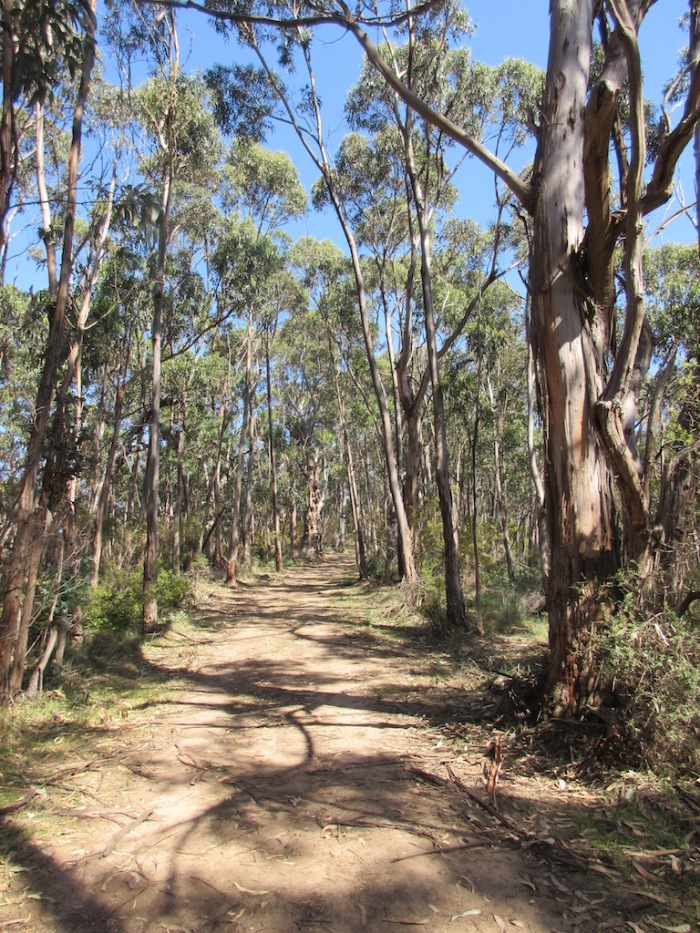 Fire trail across the ridge and through the forest.

The fire trail was nowhere near as formidable as last time. Maybe I’m fitter or (more probably) maybe it was just not having walked as far already, but I wasn’t even out of breath by the top. We surprised a couple of wallabies, saw another Gang gang and plenty of other birds.

Murder on the trail!

This time once we reached the top of the fire trail, the proper track back to the car park was open, so we didn’t need to detour via the Garvey track. 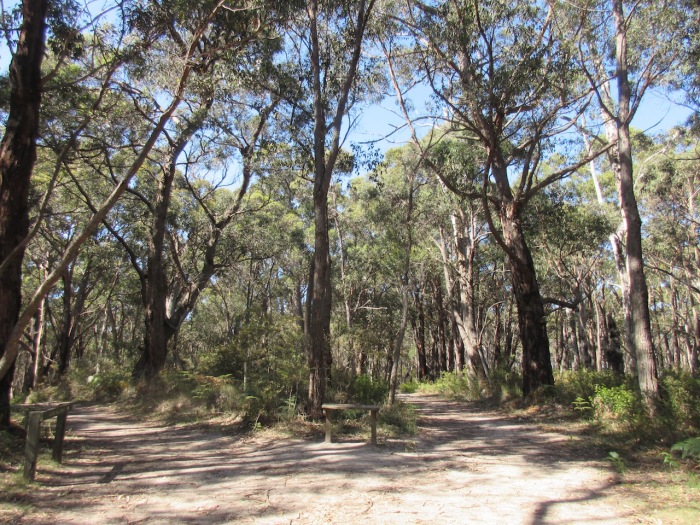 The official track had obvious signs of recent tree clearing and some heavy culvert work, so the track was in great condition. It was very steep though, so it was one of those slippery knee-jarring downhill tracks that aren’t very enjoyable. We agreed that the Garvey track detour was actually more enjoyable, so we’d probably just go the other, longer way next time!

Back to the car by 10:30am, so the shorter version of the walk was about two hours and a lovely way to spend a Spring morning.

Birds we saw: Gang gangs again! Love them, they are so crazy and beautiful. Golden whistlers! So beautiful, such brightly coloured little things and such glorious song. King parrots at the car park when we arrived… and again when we left! And superb blue wrens, currawongs, wattlebirds, crimson rosellas.

Books: The walk is described in Walking the Otways by the Geelong Walking Club/Graham Chapman.

Online:
Good map and overview of walks in the area: http://www.visitgreatoceanroad.org.au/media/2381059/lorne_walks_and_waterfall.pdf
Parks Victoria page for the Sheaok Picnic area: http://parkweb.vic.gov.au/explore/parks/great-otway-national-park/things-to-do/sheoak-picnic-area