When we went: Monday 14 September 2015
How we got there: we drove to Mount Buffalo from Bright (takes about 40 minutes). Bright is about 3.5 hours drive north of Melbourne.

Activity summary: four and a half hours of walking in alpine national park.

Snow at the start of the walk

Our plan was to walk the 3.5km or so straight to Macs Point, then circle back via Rocky Creek track almost to Reservoir car park, then along Long Plains track, back to the first junction near the start of the walk. 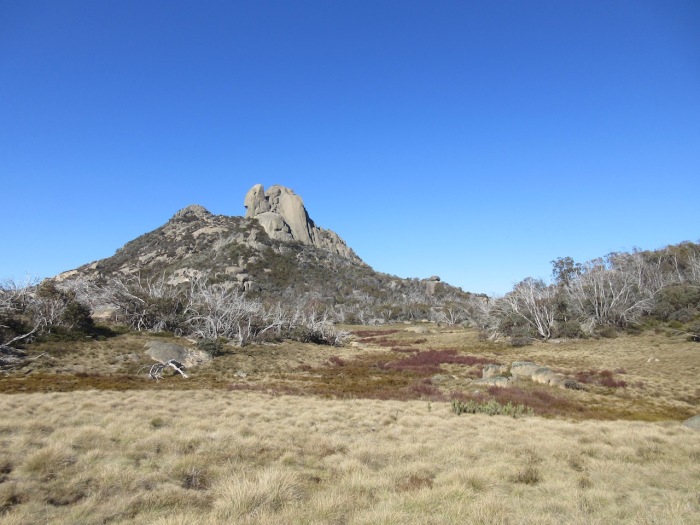 It was a clear cool gloriously sunny morning with barely a cloud in the sky, but we weren’t sure how much leftover snow was lying around, and whether this would have any affect on our walking – especially in terms of keeping track of the um, track. The start of our track was very obscured. It appeared that built up snow had deliberately been pushed from the road onto the track, probably because there was a nice bit of open ground there under the trees, I don’t know. The only way we could really see where the track was supposed to start, was the interpretive sign peeking out of the middle of a snow drift. Useful!

We could however, see the rest of the track stretching off into the distance (with the usual dingo prints pointing the way) so we headed back to the car and changed into our walking boots and shouldered our packs. We plotted a somewhat safer route down to the plain and managed to make it down the embankment from the road without sliding on our faces in gravel or ending up waist deep in snow.

We headed off down the trail, crunching through patches snow and ice, and then crunching along the bare gravel in the morning sunshine. 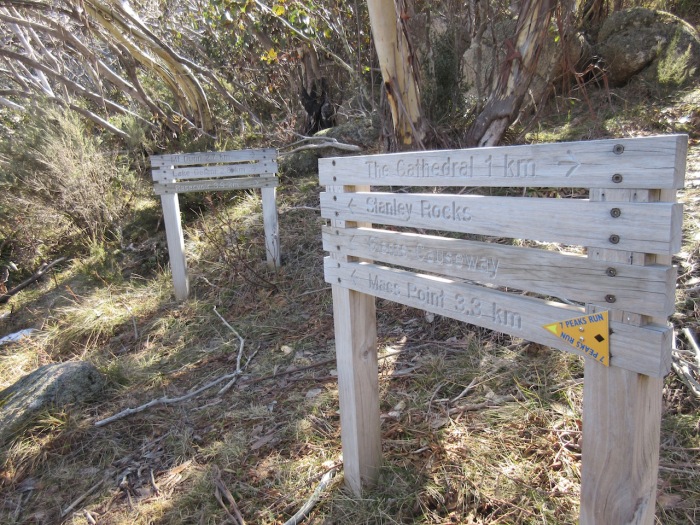 We headed left here towards Macs Point, but would rejoin the trail at this spot on the way back.

The Macs Point track wove in and out of shadowed gullies with remnant snow, and out into sunny valleys. The vegetation was punctuated by stands of old growth bleached white with sun, dead from bushfires in 2007.

The trail winding away through the trees.

As the area is an old complex of ski trails there are lots of old sign posts on the trail, some of which made us stop in bemusement. “Drill Holes”, one proclaimed. What does this even mean? 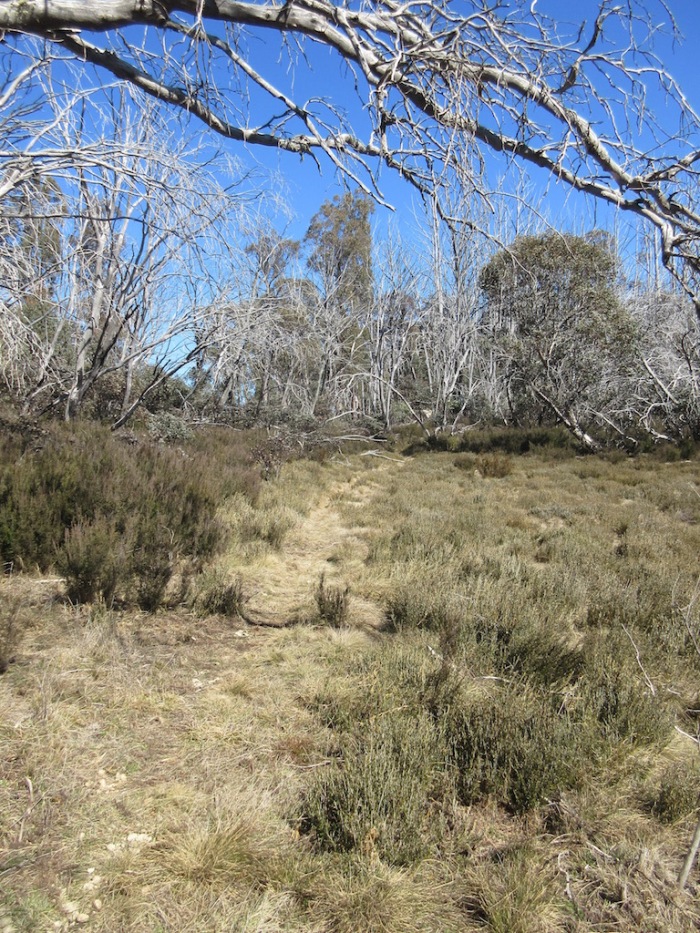 Footpad across the wild Dog Plains. No dingos on view this time.

The trail wound in and out of the forest until we were almost at Macs Point. Here, the forest suddenly changed from fire regrowth into old growth forest. It was the most beautiful transformation of the mountainside. Huge trees, beautiful and varied undergrowth. It was a completely different experience, and I marvelled at what it must have been like on the Mountain before the fires.

We reached Macs Point just on 11am and stopped to enjoy the glorious view, with a drink and a snack. 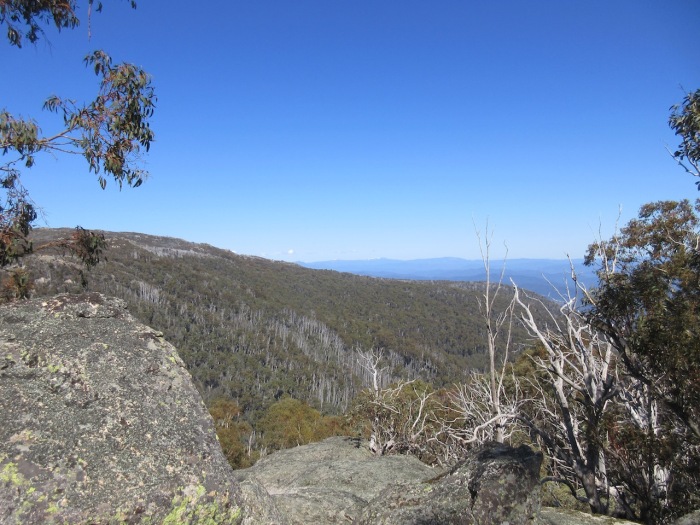 We then headed back through the tall forest, to the turn off to the Rocky creek track.

It was interesting walking along Rocky Creek track, the last time we came through it was all under snow. This time the snow only lay in the shadowed areas of the track. 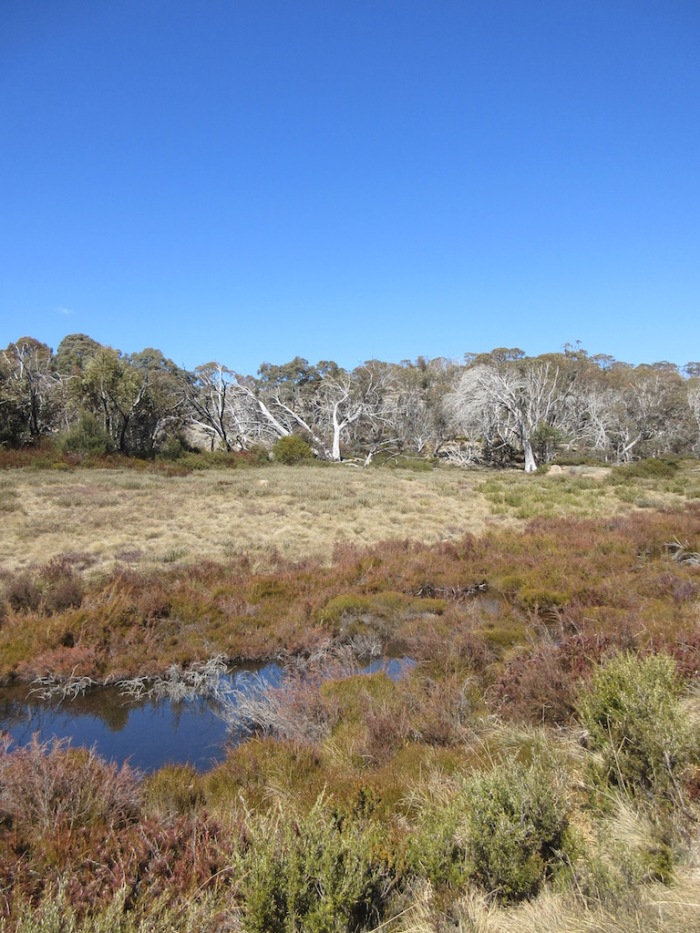 Stream flowing across the Long Plain 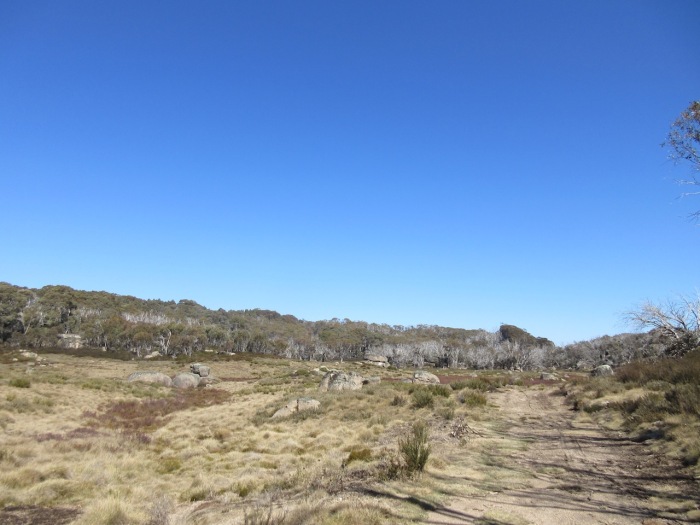 Rocky Creek track in the sunshine

Stream across Rocky Creek track. Last time we forded this it was a bit more challenging.

At about 12:15pm we reached the turn off to the Long Plain track.

This sign marked the end of our time on Rocky Creek track.

About 15 minutes along the Long Plain track, a sign marked a turn off to right to Mt Dunn. We hadn’t planned on doing this side trip but it was still early in the day, so we decided to take a look. The track wound its way back and forth through 12 hairpins up the forested side of the little mountain.

Then we reached the top of the tree line and could see the huge pile of boulders that was our destination. A beautifully engineered set of stairs and rail snaked around the side of the rocks and then Oh!

The view on the way around to the summit was spectacular.

The view on the way up Mt Dunn

Around to the North side of the boulder pile and another set of ladder stairs against the stark rock face, heading straight up.

The glorious engineering of the stars on Mt Dunn

And then on top. Wow. 360 degree views of the whole area we’d been walking. Our lunch spot was decided. We stopped and munched on carrots, and just stared.

The view from Mt Dunn

View north from Mt Dunn, including ‘how to use ladders’ infotainment.

Shadows rolling across the mountains

Looking back at Rocky Creek Track from Mt Dunn.

Too many view photos, I know. But it was just divine. 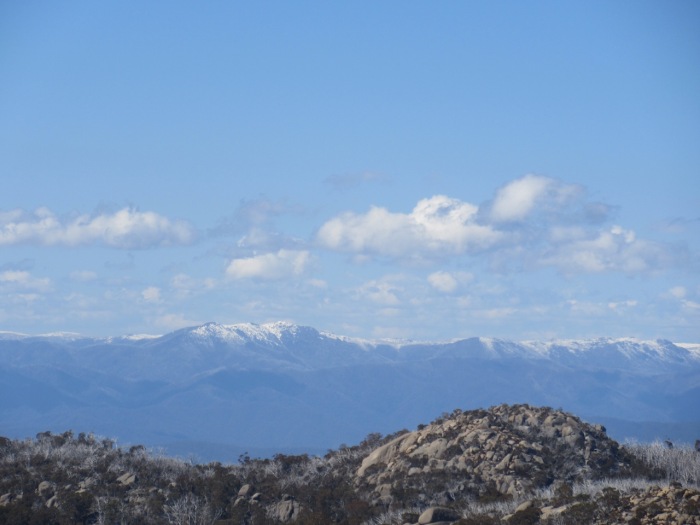 Snow on the distant alps

Then back on the track in the afternoon sunshine.

Back on the track across the Long Plain.

We reached the cross track around 1:20pm, and climbed back over the ridgeline to the Macs Point track.

Junction sign indicating the way back to the Cathedral, where we were parked.

Just as we reached the Macs Point track, we stopped in wonder. A pair of spotted pardalotes were hopping around on a dug up area. We’d spotted a couple of broad areas of shallow digging that looked a lot like lyrebird digging. The pardalotes seemed to be collecting broken rootlets as nesting material. One collected a small bundle while the other kept watch. We observed them for a few minutes and they finished their collection and flew off.

Then when we were almost back to the car, we saw one pardalote sitting the branches of a tree quite close to the trail. I started making little whistling and kissing noises, and to our amazement it started singing and hopped to a closer branch. Then a little closer and closer. Until it spiralled right around to my right shoulder to a branch not 30cm from my face. Cheeping its little song while I made silly noises at it. Then all at once it decided it had checked us out enough, and it flew.

Amazement. They are SUCH beautiful birds up close. Pictures here if you’re curious.

So we reached our car around 2pm, rounding out four and half hours. But I couldn’t help but want to investigate the start of the track more. 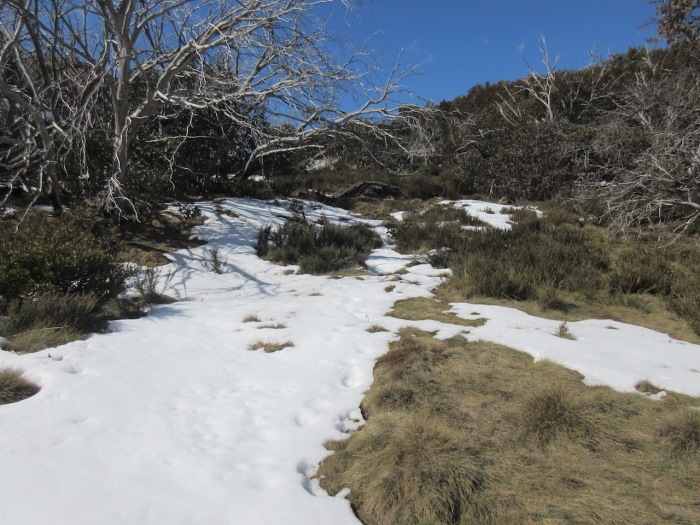 Snow back at the start of the track.

There was still a fair bit of snow around, but I wanted to check that half submerged interpretive sign. 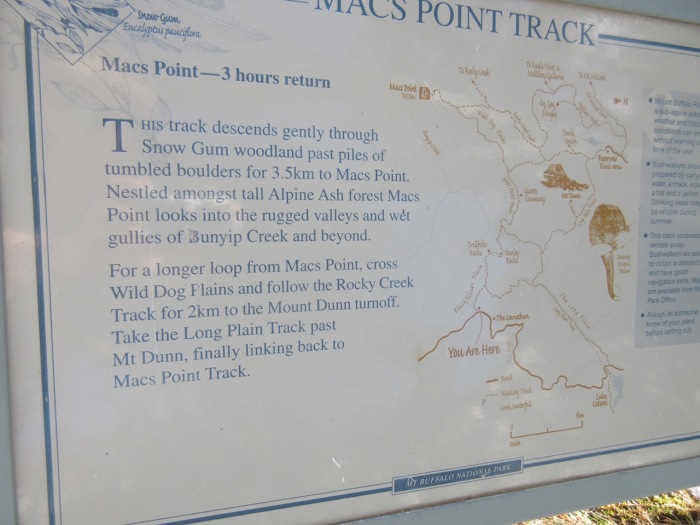 Half submerged sign. Indicating the walk we just did!

Well okay. We thought we were original going the way we went. Apparently not!

Oh and despite intentions on the way down to the start of the track from the car… I did end up waist deep in snow on the way BACK, trying to find a shortcut… haha! 🙂

Maps: We used the Mount Buffalo Outdoor recreation guide as our map for this walk.