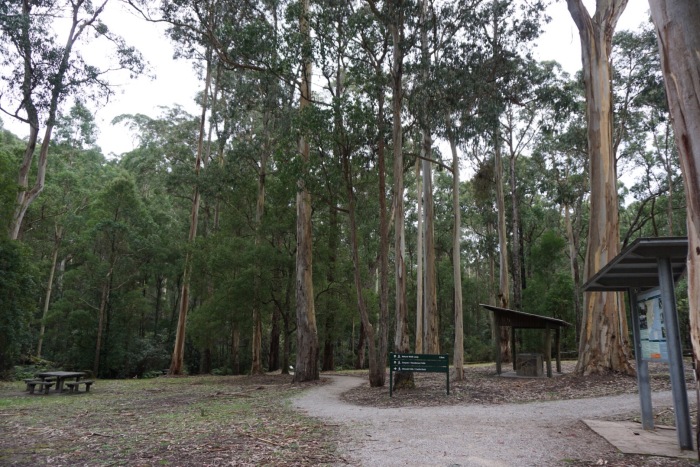 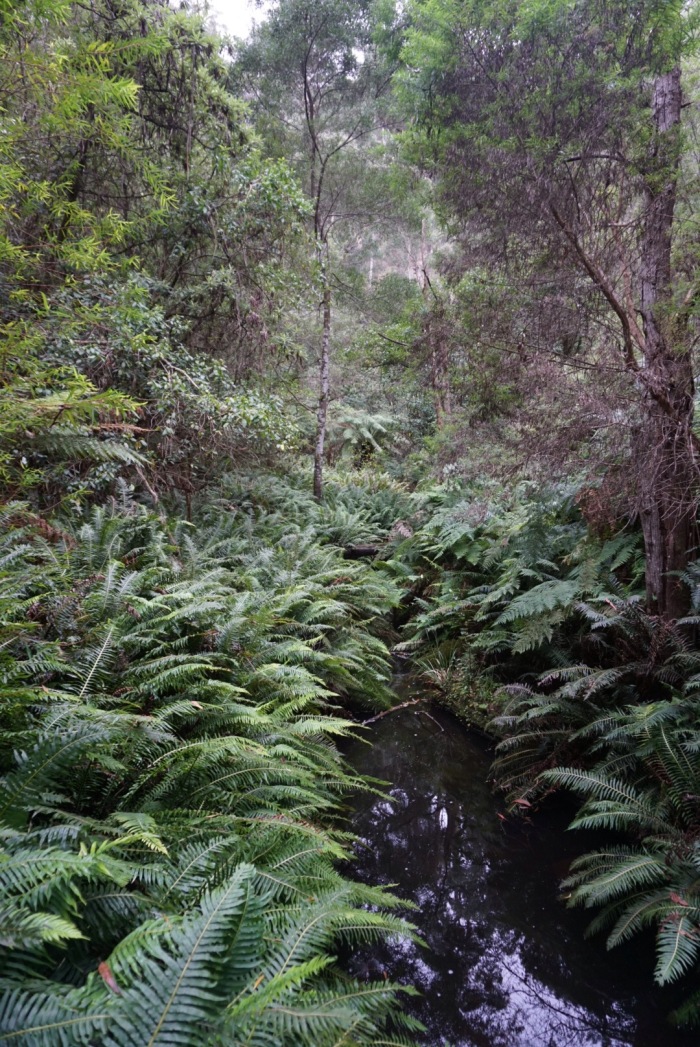 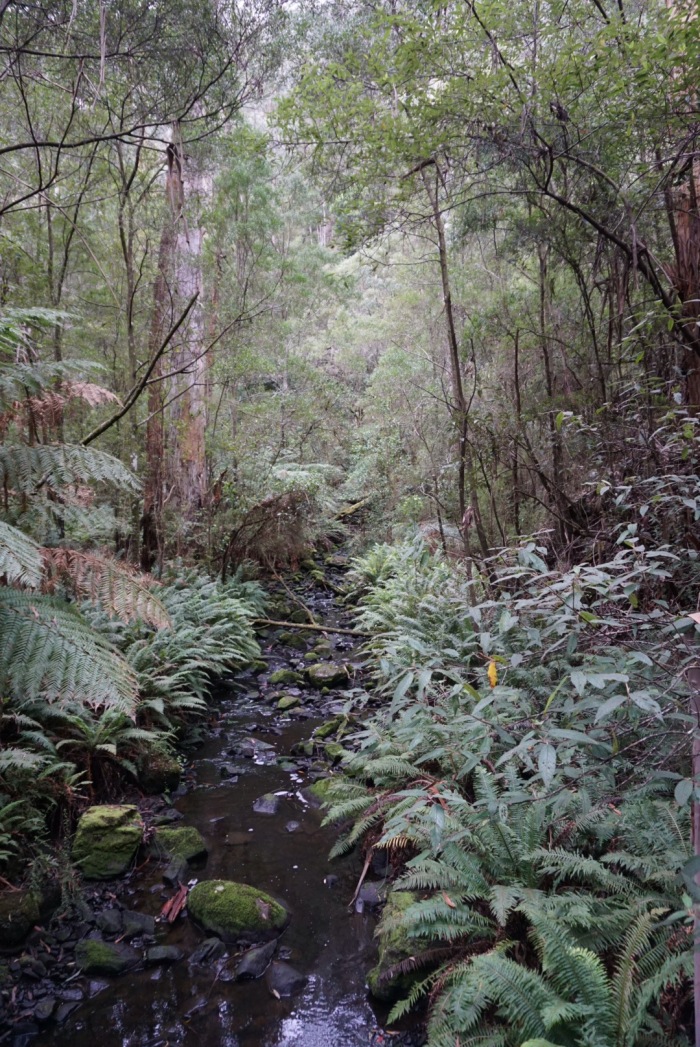 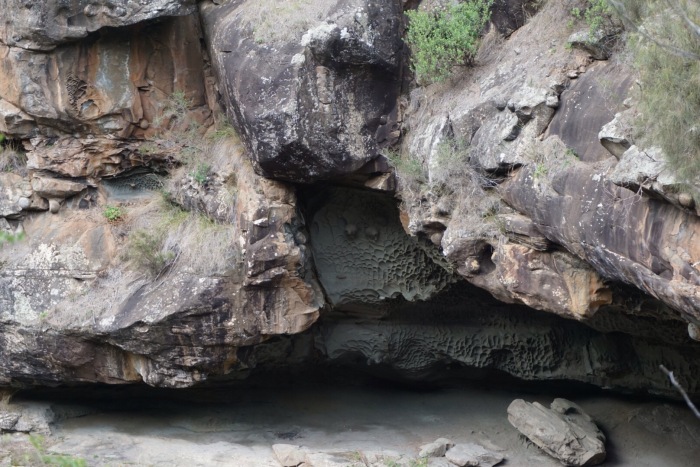 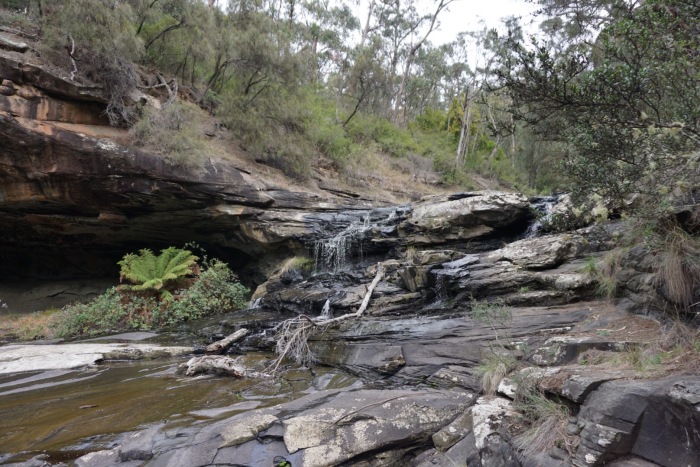 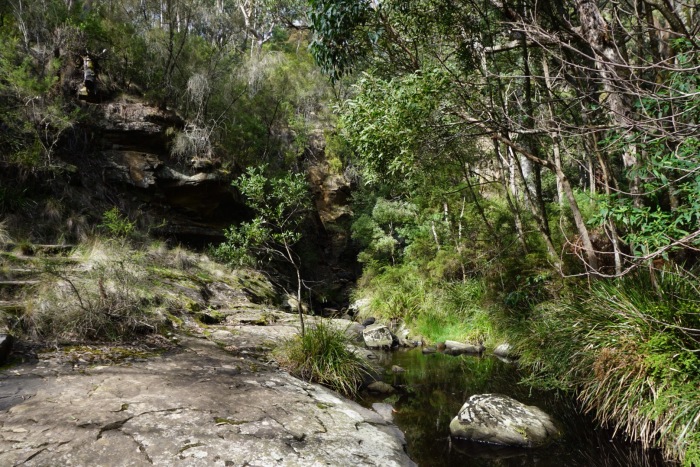 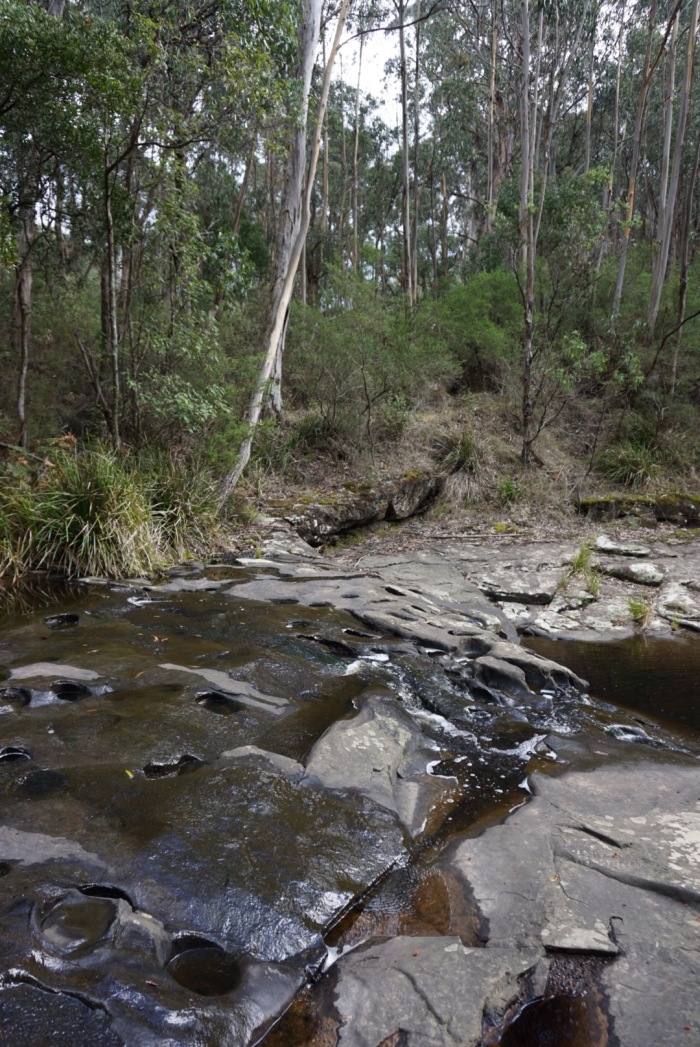 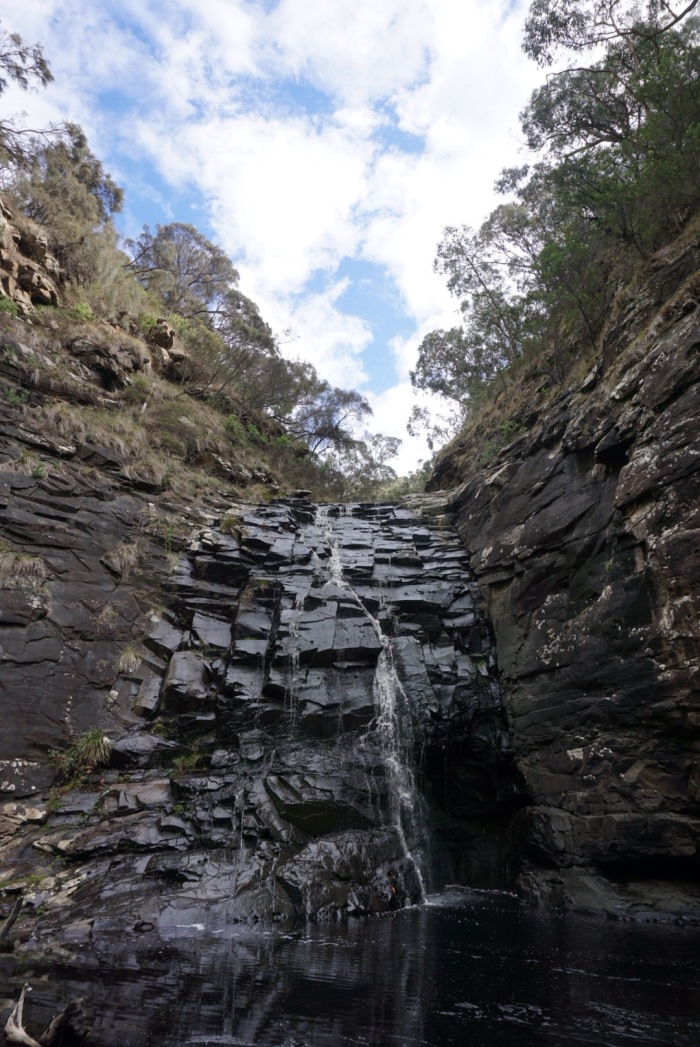 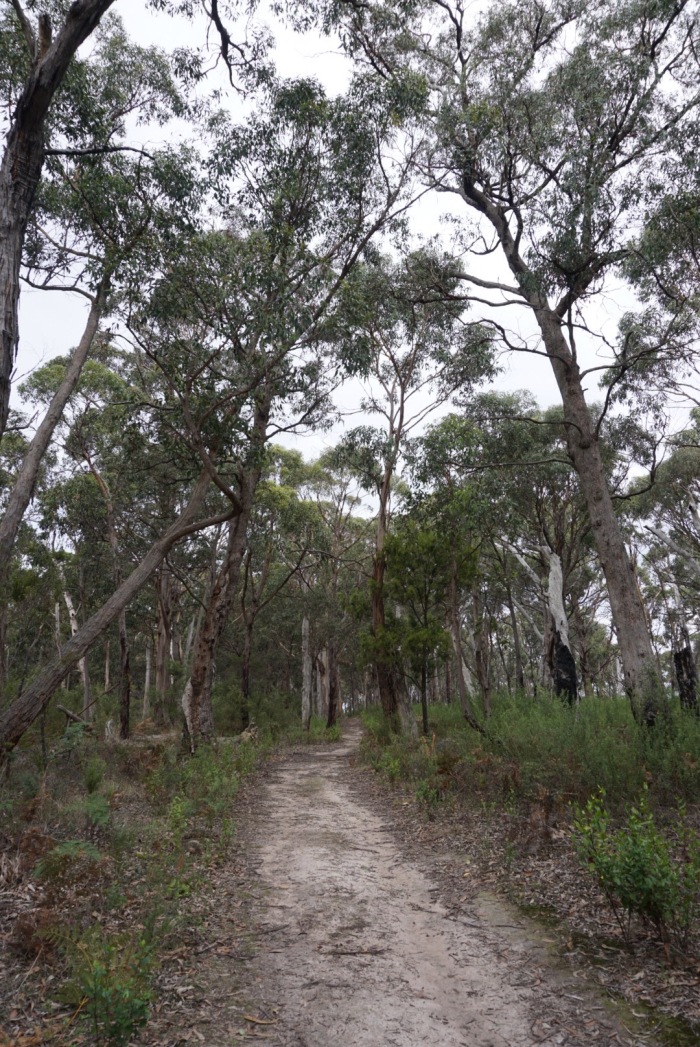 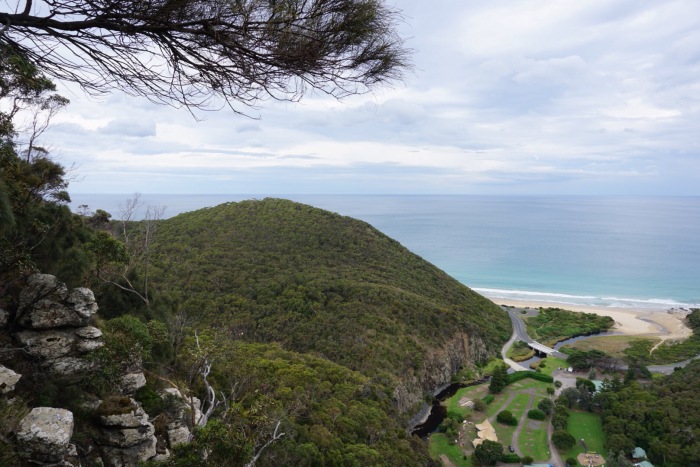 When we went: Saturday May 2

How we got there: we drove from Lake Elizabeth to Sheoak Picnic area via the grandly named but unsealed ‘Route 22’. Coming from Melbourne, the closest town is Lorne, about two hours by car.

We started out at 11:45 am from the Sheoak picnic area just north of Lorne. The picnic area is well kitted out with coin-slot barbecues and full facilities – very tidy and picturesque. The tracks are all well signposted, so we started out on the track labelled “Nature walk” which would then join with the tracks deeper in the park.

The first two or three kilometres follows along Sheoak creek, winding in and out of damp, ferny gullies with stout bridges over the creek. We arrived at the lookout to Swallow cave around 12:30pm – no swallows this time of year, but the mud daubing in the underhang was amazing.

Back up the track a little and around to the stepping stones across the creek on the way to the falls. The rock platform area here was one of the most beautiful parts of the walk. The water quietly flowing over the flat rock, pitted with deep round pools, the whole area draped with grasses, ferns and trees. Stunning. We then tromped down the other side of the creek, down down down to the falls – knowing all the while that we were about to retrace our steps to get back to top. Shudder.

But the falls were beautiful, even with only a small trickle of water over the top. The black slatey face of the falls was still wet and glistening, and the pool at the bottom was dark and deep. It would be an amazing sight during full flow. The sad part about all of this was the huge amount of blackberry plants around this section of the walk: around the base of the falls, and both sides of the gully around the falls. There was a spraying program in effect, signposted as we entered the park – but it would take some serious back-breaking work to get to some of the plants on the steep gully edge.

Moving on, we then climbed our way out of the deep gully and back to the turn off to the castle rock track. This section of the walk was tough. All up hill, quite steep/relentless in some sections. We took a few breaks. The track is still good, lots of steps cut and boarded from the falls to the Castle Rock turn off, and the first steep section of the turn off track as well. It then hits the ridgeline and a fire trail and the forest opens up. The track is still uphill for another kilometre or so to the Castle rock turn off and… I struggled. Maybe 2 km of constant climbing is just tough… Maybe because it was the third walk in 24 hours. Maybe because my stale croissant for breakfast was all sugar and no protein.

So we stopped for a bit of a scroggin snack and a rest, and when we set off I kept pretending I was *totally fine*, smiling and helloing to passers-by. Even to the man who gleefully told us that ‘I’d love to say you’re nearly there, but you’re not!’ Grrr.

Reaching the Castle rock turn, we headed out through the forest and then down down down more steps and out to the fenced lookout perched on the steep rocky bluff. The Cumberland River holiday park laid out below – it looked like they were packing up after a wedding. To the right, the steep, green river valley stretched out in the sunshine, and off to the left the sea glistened and lapped on the beach. Lovely. We decided we’d like to do the Cumberland falls walk sometime, the valley was very pretty from above.

A rest and a snack at the lookout and we climbed back up up up and out onto the fire trail and what we *thought* was the last km of our walk back to the picnic area. But no, we reached the turnoff back to the picnic area and the track was covered with ROAD CLOSED signs. They were serious. (In the glory of hindsight, this is noted on the Parks Victoria website under their change of conditions http://parkweb.vic.gov.au/explore/parks/great-otway-national-park. Ah well, live and learn.)

So our path back to the picnic area became a 2.5 km walk, out to Garvey track and then along back to the picnic area. The Garvey track section was gorgeous though: with the afternoon sunshine on the forest, and we encountered no cars, so it was a relaxing amble gently downhill to the end of the walk. We got back to our car around 3pm ish, tired and hungry – and then drove up to Deans Marsh for a huge, delicious late lunch! 😀

Birds we saw: Gang gangs! At the falls end of the Castle Rock fire trail, a pair of gang gang cockatoos were feeding high up in the trees. We only noticed them because we’d stopped for a breather and they were nibbling away dropping the occasional debris from on high. Such quiet, deliberate birds – that was the big treat of the walk. We also saw eastern yellow robins, and fantails and wrens (ie: the usuals! 🙂 )

Books: The walk is described in Walking the Otways by the Geelong Walking Club/Graham Chapman.

Online:
Good map and overview of walks in the area: http://www.visitgreatoceanroad.org.au/media/2381059/lorne_walks_and_waterfall.pdf
Parks Victoria page for the Sheaok Picnic area: http://parkweb.vic.gov.au/explore/parks/great-otway-national-park/things-to-do/sheoak-picnic-area