The start of the walk at Sheoak picnic area

On the trail to Lower Kalimna Falls 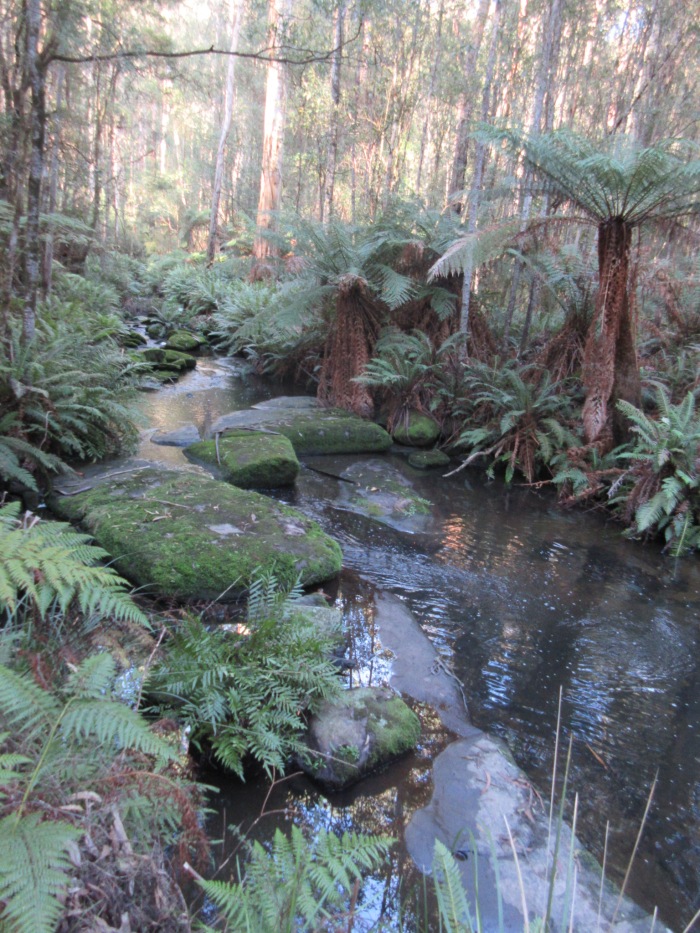 Sheoak creek tumbling through the ferns 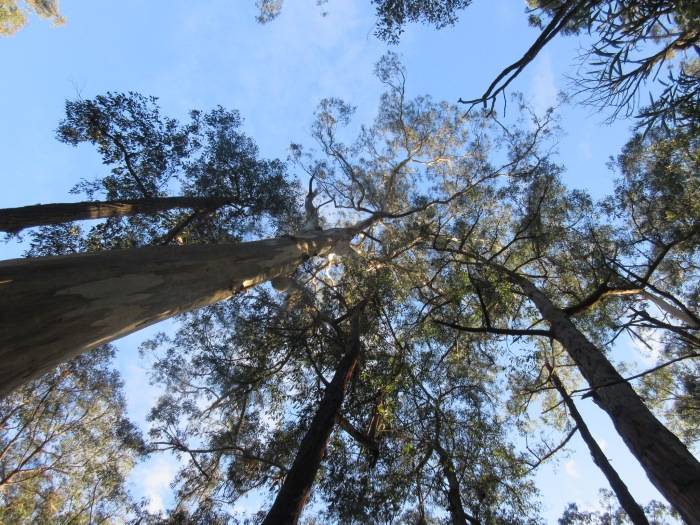 Random rusty sawmill machinery slowly being subsumed by the forest 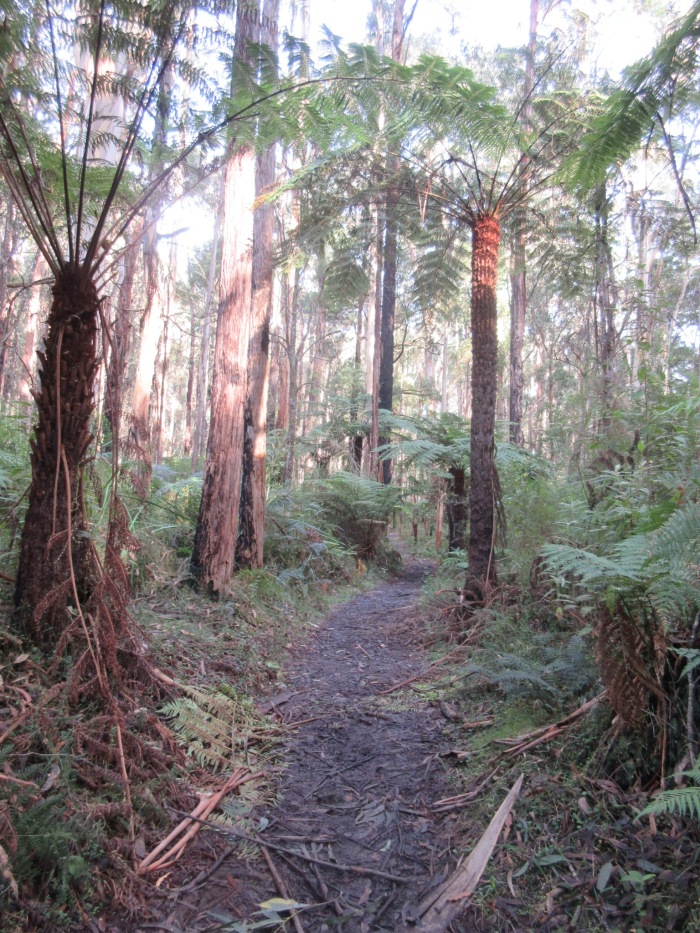 Tree ferns beside the track 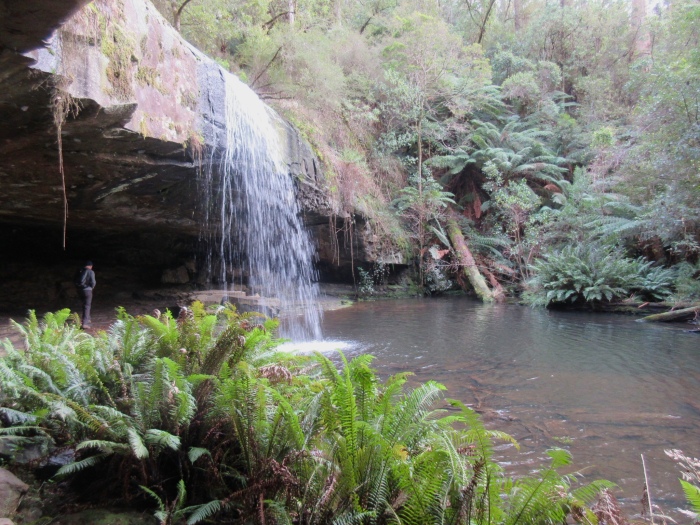 Lower Kalimna falls, and for scale: my partner under the undercut 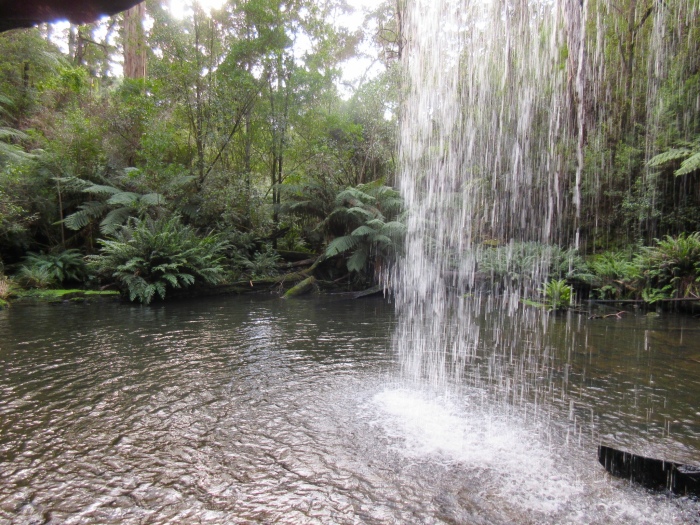 On the trail to Upper Kalimna falls

Boardwalks down to the falls 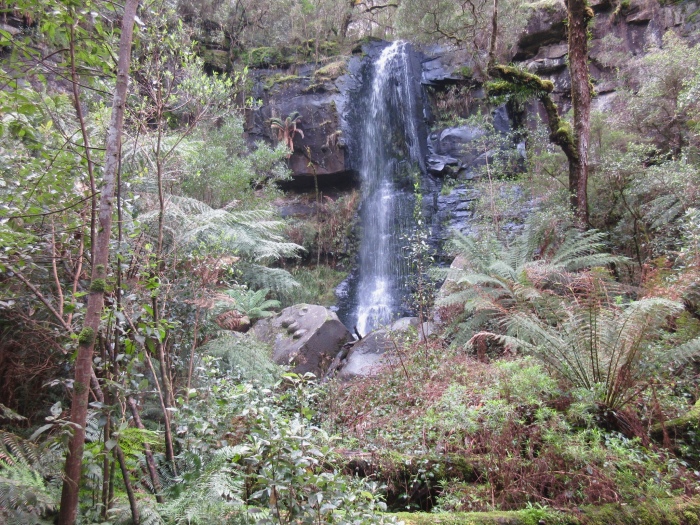 Upper Kalimna falls – taller than the lower falls, but not as impressive

Lichen on the link track back up to Garvey track

Fungi and sundew on the link track

The cutest coral fungi, in moss under the track junction sign on Garvey track 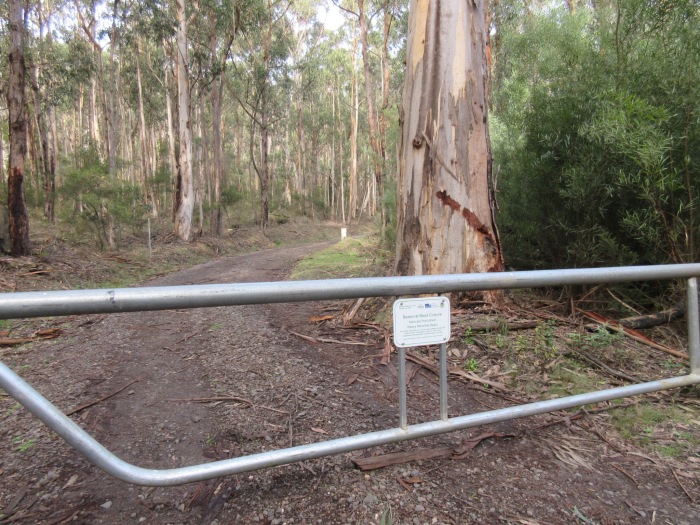 Start of the Cumberland river track (behind the caravan park) 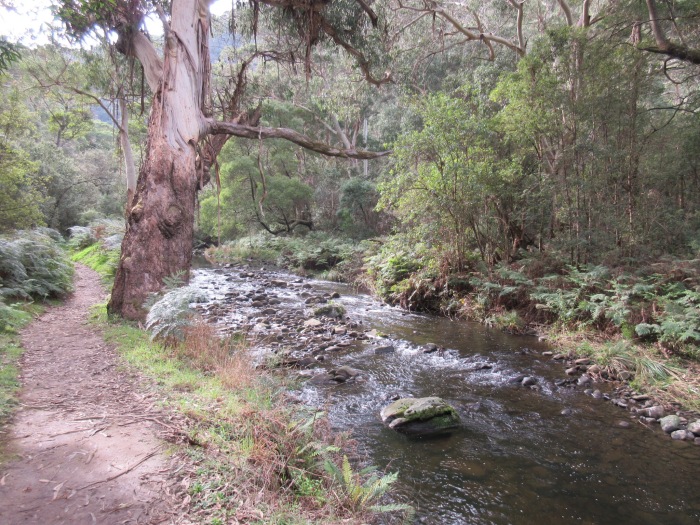 Track beside the river 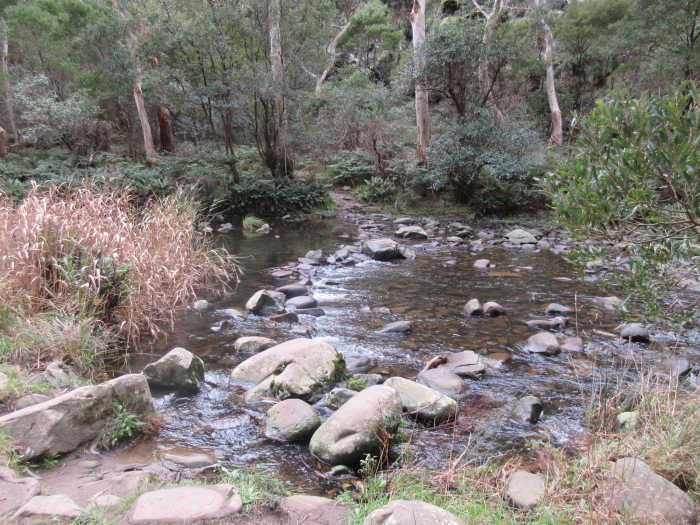 The track over the river. This was an adventure.

Jebbs pool and the end of our adventure

How we got there: we drove to the Sheoak Picnic area at Lorne from Melbourne (via Anglesea). It’s about two hours by car.

Activity summary: One 2.5hr forest circuit walk to two waterfalls. And one failed return walk along (and over) a river to a waterfall, so no spectacular details for that one.

What we did (the details): We arrived at Sheoak picnic area at about 9:30am and set off across the road to the start of the Kalimna Falls walk. You can begin further down the road and walk on the north side of the creek for the first part of the walk, but we started at the carpark and hence kept to the south side.

The track was clear and well marked, following alongside the creek. The area is an old logging area, and the tracks were once old horse-drawn tramways. The trails are hence fairly wide and flat and the eucalypt forest is dominated by tall, straight, fairly young trees. The leaf-strewn track was edged with ferns, herbs, mosses and fungi. The creek burbled with dark water and dense ferns curtained the northern edge.

After about half an hour we came to the bridge where the northern creek trail crosses over and joins with the main path. We continued on towards the falls. Another half an hour through the forest and we reached the right hand turn off to Lower Kalimna falls. We passed a family of three heading back out as we headed in, the falls were just a short distance after the junction.

The falls were beautiful. A wide rock face with a huge undercut, the track follows down the left hand side of the falls and underneath the rock ledge – so you can walk right behind the falls. The pool where the falls land is ringed tight with ferns and greenery, so the whole area is just lovely. I can’t even begin to imagine how spectacular these falls would be after a big rain – but they were a pleasant reward even with the small flow when we visited.

We retraced our steps back to the junction and headed towards Upper Kalimna falls. A little way along the trail and we could hear voices again; it seemed that the ten year old daughter was stamping her feet and refusing to go any further “But you SAID we were only going to the first falls!” Dad was sitting on a track-side bench to wait out the tantrum, and Mum had wandered a bit further along the track.  She rolled her eyes to us as we approached. “The youth of today,” she said and smiled wryly.

The track at some point stopped being the superhighway, presumably it wasn’t an old tramway the whole way to the falls. But was still clear enough, just becoming muddy in a few spots as it wandered deeper into the forest towards the upper falls.The ferns and forest leading to the upper falls were beautiful, everything carpeted in moss, lichen, liverworts and fungi. It took us about 20 minutes to get to the look out to the upper falls. The upper falls were pretty, but not as spectacular as the lower falls. The base of the falls were choked with a blackberry tangle between the rocks – which I always find disappointing. The rocks at the base of the falls were amazing though, they had huge hemispherical holes and nodules in them – like some kind of giant lego. We only spent a couple of minutes at the upper falls then headed back out.

On the way out we passed the family again, walking in. First Dad, then soon after Mum, picking daughter up from the muddy path. “Now my BUM’S wet!” she was exclaiming, wiping herself down as we walked past. Stifled laughter followed…

I tried not to stop every twenty metres to take photos of fungi as we returned to the junction with the link track that would lead us up to the Garvey track. Honestly this was a struggle, as there were so many interesting tiny/weird/slimy things to look at. But we had other walks to do on this day, so I tried not to get too distracted. We climbed up the zigzag of the link track and reached the Garvey track where we paused for breath, a drink and a snack. And I took about twenty photos of the tiny coral fungi in the moss under the sign. *cough* Well we were stopping ANYWAY.

From there it was a swift enjoyable trot down the gravel road back to the car park.

We decided that even though it was right on noon that we wouldn’t stop for lunch yet, but move onto our next planned walk: Cumberland falls. This turned out to be a bit of a disaster. Not the skipping lunch thing, the whole Cumberland Falls thing.

We drove out towards Cumberland River, staring at the directions on the track notes trying to work out where to park… and were forced to drive past the actual turn off, and on the Great Ocean Road at that point, that meant driving for a few kilometres before we could find a safe place to do a Uey. Anyway, we went back, and parked in the little parking area on the beach side of the road, where the track information board is. The board was full of the usual warnings about not doing the walk when the river levels were high – but nothing to indicate what exactly ‘high’ meant. The lack of roadside signs indicating there was walk in the area surprised us.

Okay, packs off for this one, as we didn’t plan to need any snacks/drinks/coats on this walk, so we set off across the highway. Also, once we crossed the highway, we realised we could have parked outside the caravan park, it just looks a bit like it’s customer-only parking when you roll past, but it’s not. Okay, all of that sorted, we started off in earnest around the side of the caravan park, along the riverside. Behind the caravan park there was another information board for the walk – and some old signs that looked unloved. Plus the usual warnings about the river crossings. Hmm, it again seemed odd to us that this walk was not being made very clear to passersby. Undeterred we headed on.

After about ten minutes of pleasant gorge walking by the river, we came to our first river crossing. It was a fairly long stepping stone hop, but after a bit of wobbling and zero splishing, we were on the other side.

The track from here was a bit rougher, after another ten minutes or so we reached Jebbs pool. At this point it was obvious where the track was supposed to go – we could see the trail marker on the other side of the river, but the stepping stones looked really difficult. We stayed on our side and wandered up the river a bit further to the flat rocks above Jebbs pool. It looked like there were multiple other crossing points that people had forged across, but with the current water flow, they all looked dangerous. Staying on the same side, we followed a bush-bashed path along the river a bit further, but it dead-ended in blackberries so we turned and retraced our path back to the more official-looking crossing point.

We rock-hopped about a third of the way across, but the middle one-third of the rocks were all submerged under swiftly flowing water. We mucked around for a bit feeling more and more frustrated but eventually gave up and headed back to the car.

It didn’t feel like the river had THAT much water in it, so we felt a bit cheated by the whole experience. What’s the point of going to a waterfall after all, if there isn’t a bit of water around to make the falls worth visiting? On the other hand, looking around at other blog posts, like this one and this one, these folk seem to have a lot less water in their rock hopping pictures than we did… I guess that’s the price of walking in June instead of January. Also, after consulting our track note maps back at home, the path is shown as crossing the river quite a way after Jebbs pool – so I’m not really sure after all if we were trying to cross where everyone else was. We’ll just have to retry another time of year. I guess that’s why Parks Vic doesn’t signpost the walk on the highway…

So the walk grading for these walks is grade 3 for the Kalimna falls walk, but a grade 5 for the Cumberland falls walk, at least when we went. We would almost certainly have had to do a wade to cross safely, and we weren’t set up for it.

Back at the care around 1:30, we drove back to Anglesea for a yummy late lunch at McGains, and then home.

Books: This walk is described as walk 21 – Upper and Lower Kalimna Falls walk in “Walking the Otways” by the Geelong Bushwalking Club. We also attempted the Cumberland falls section of walk 22 in the same book, but that didn’t go so well.