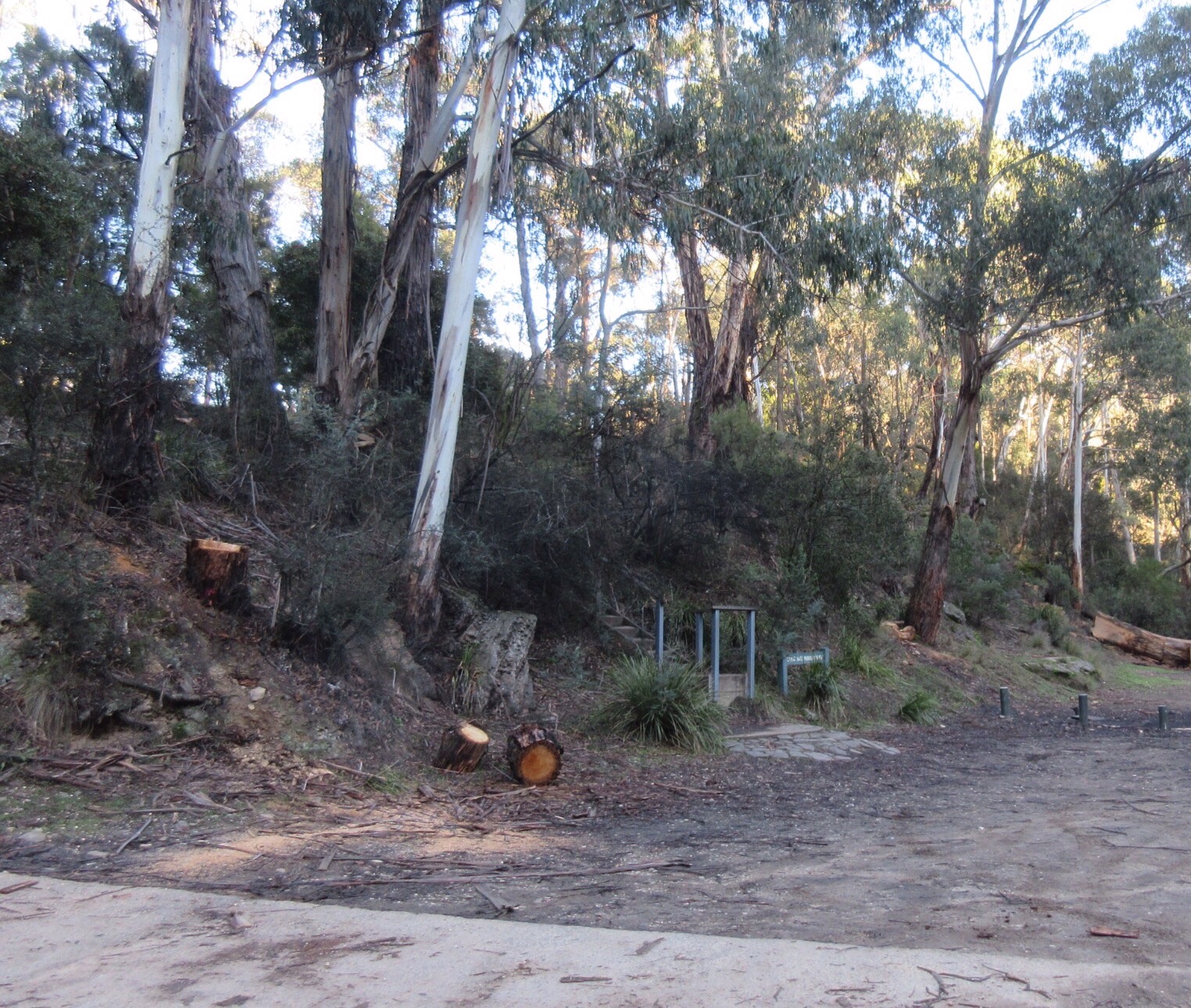 O’Briens Crossing and the start of the walk

The track winds steeply uphill at the start

Most of the trail is dead flat, as it sits atop an old water race 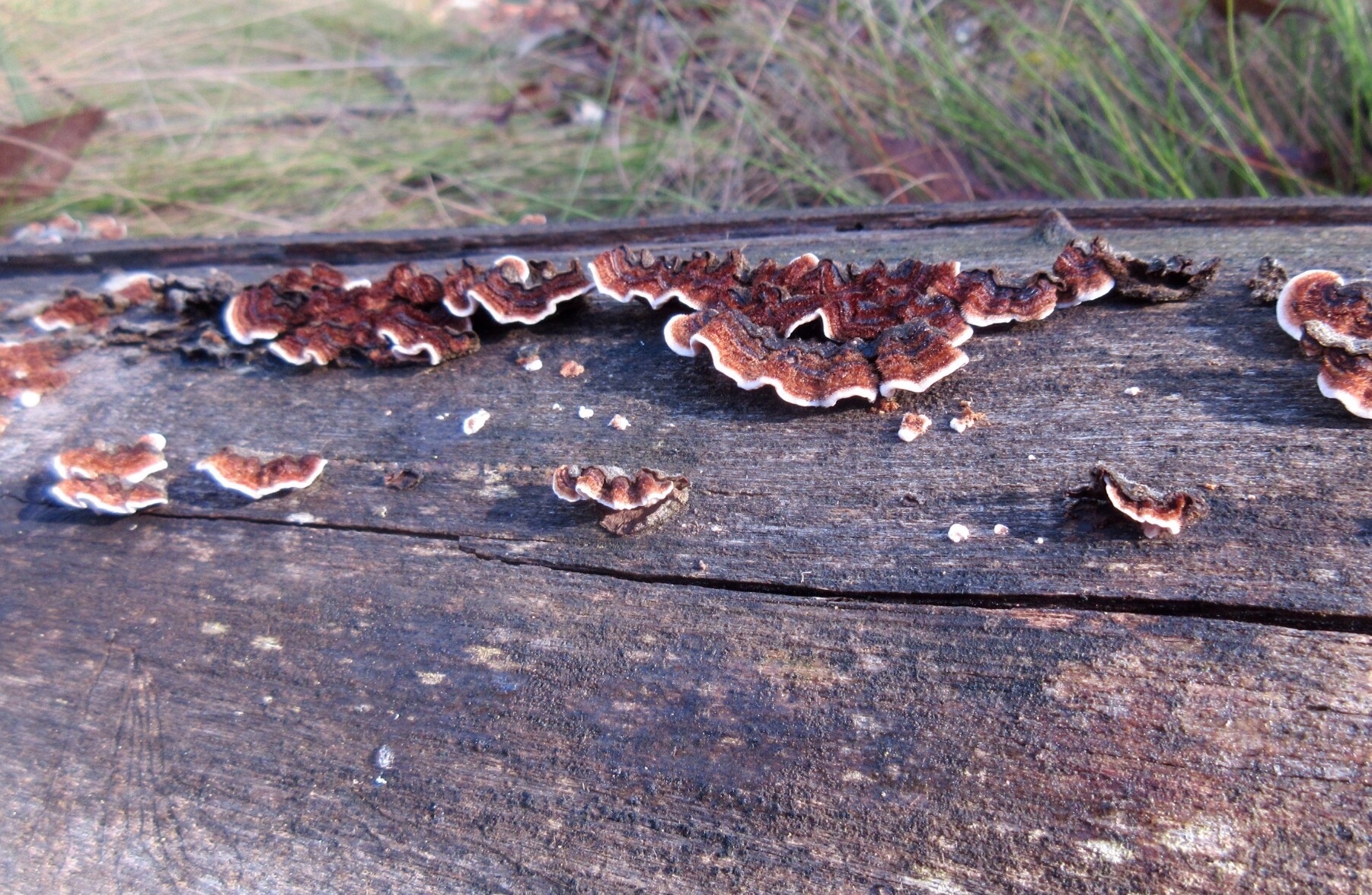 I think this may be Stereum illudens, growing on a eucalypt log beside the track

My guess is that this is Mountain Correa (Correa lawrenceana)

The morning light through the forested hillside was beautiful

Not sure what these were, we only saw them on one spot on the trail. They were very striking. 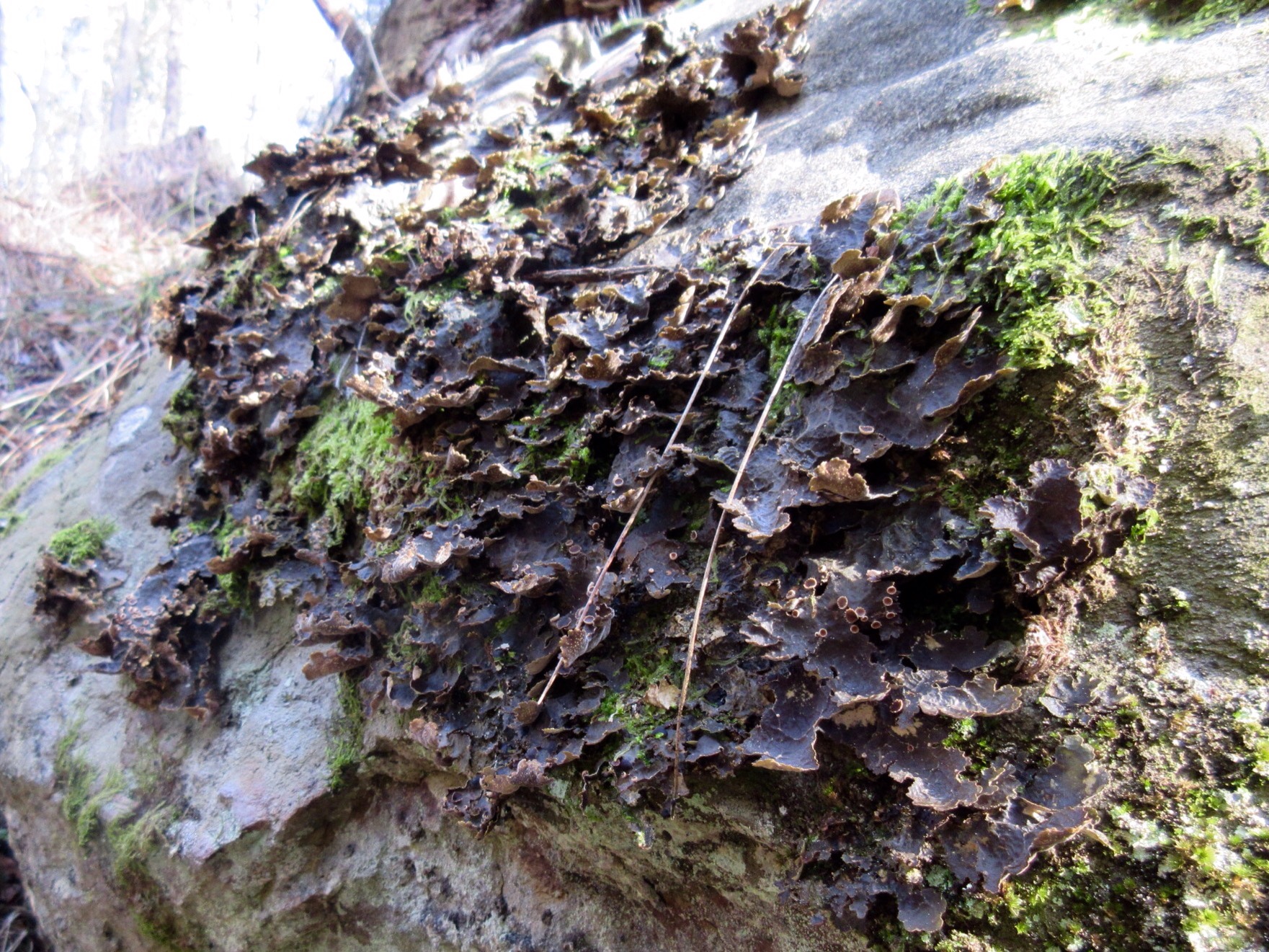 Beautiful lichen on the side of this shaded rock.

There were lots of these delicate ferns in the shaded gullies. 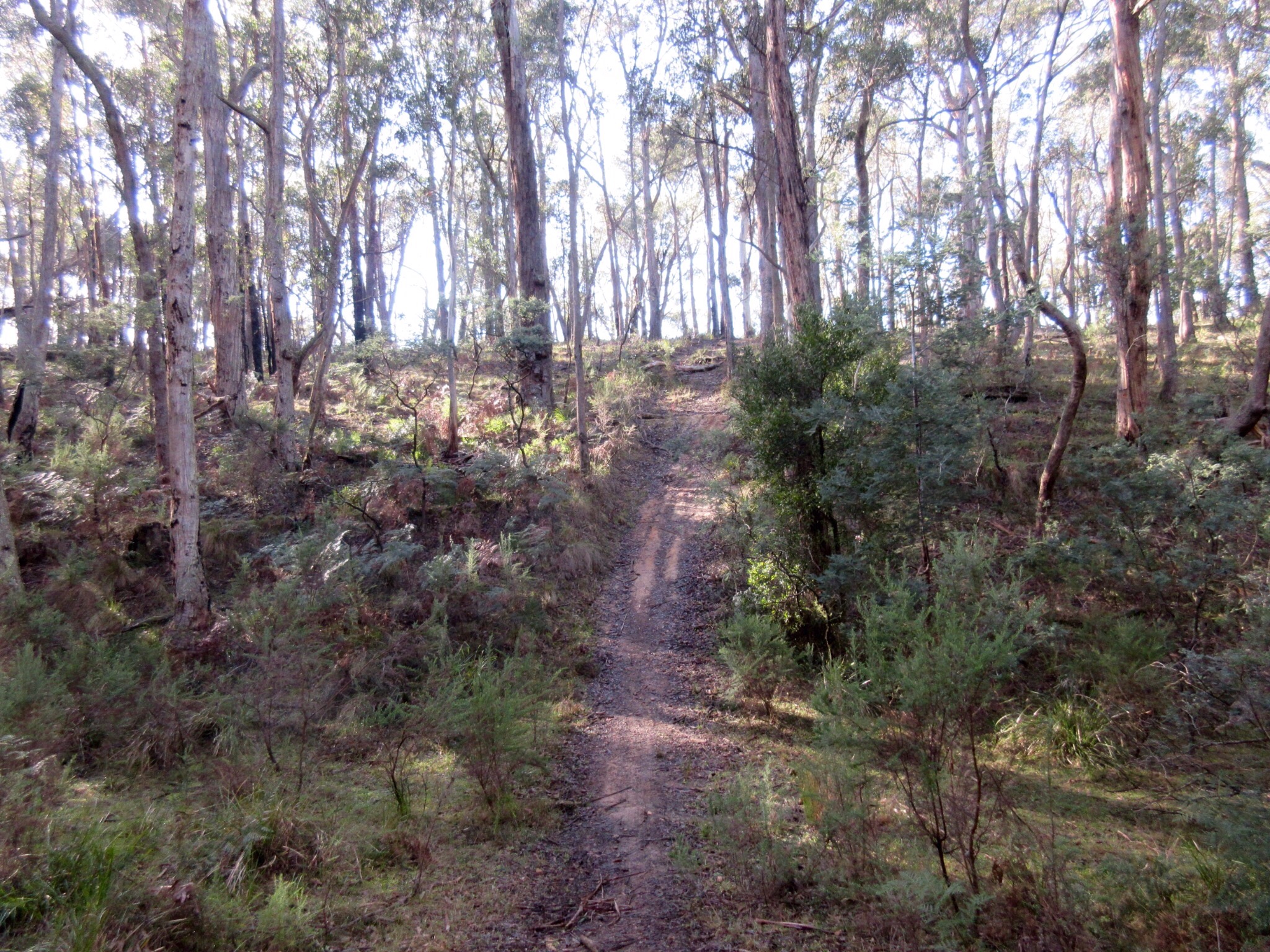 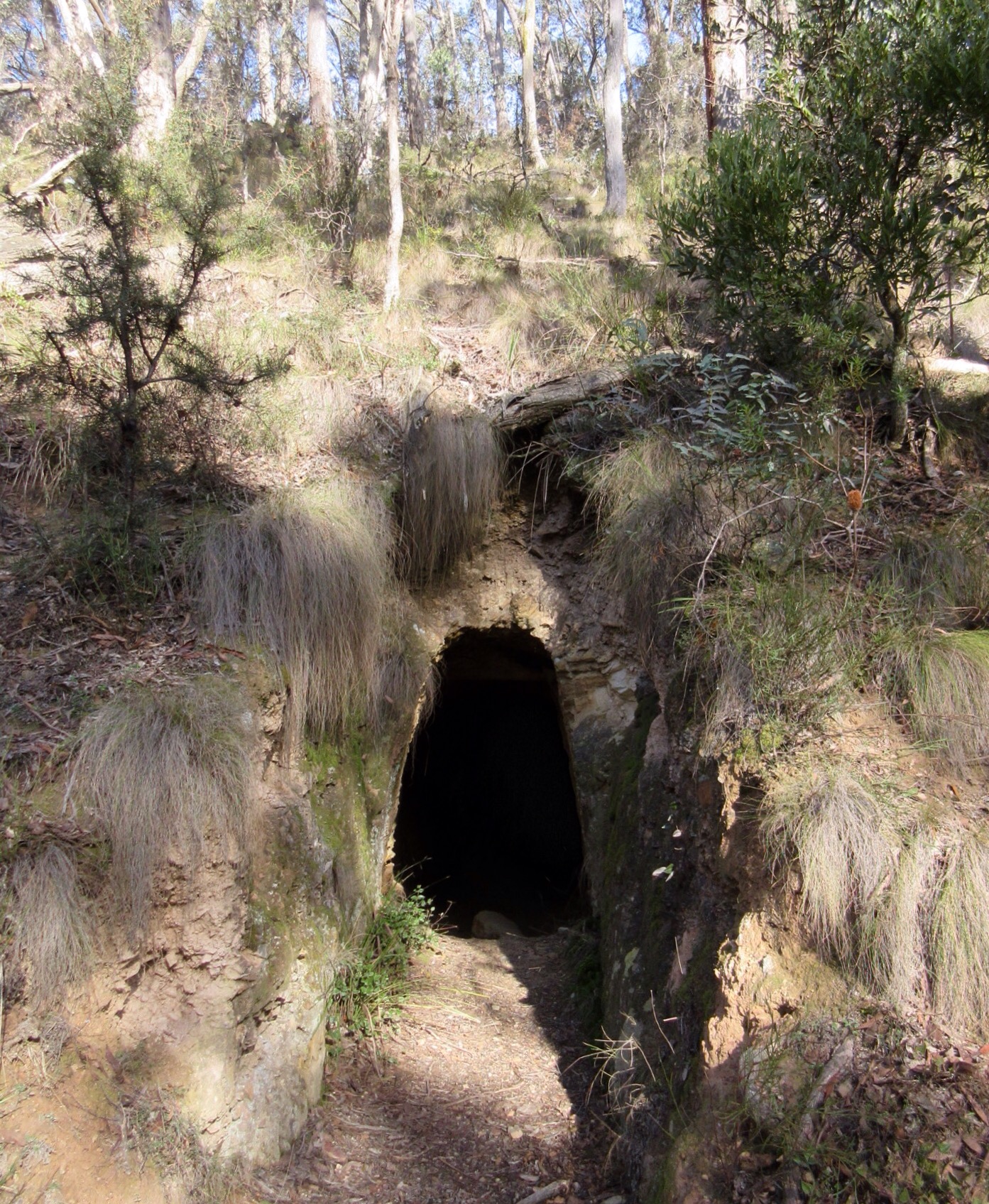 Mine entrance beckoned darkly as we passed. We didn’t succumb. 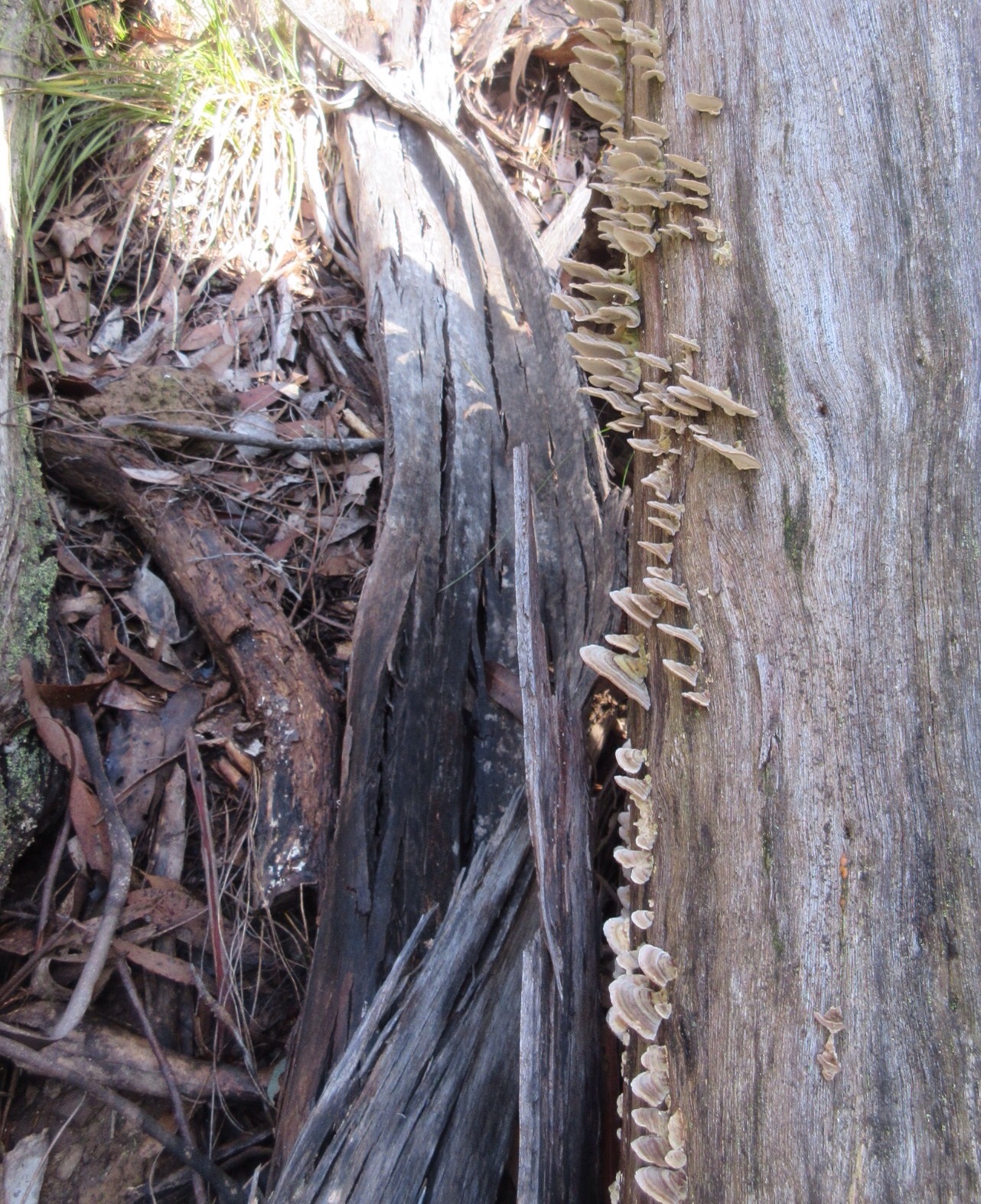 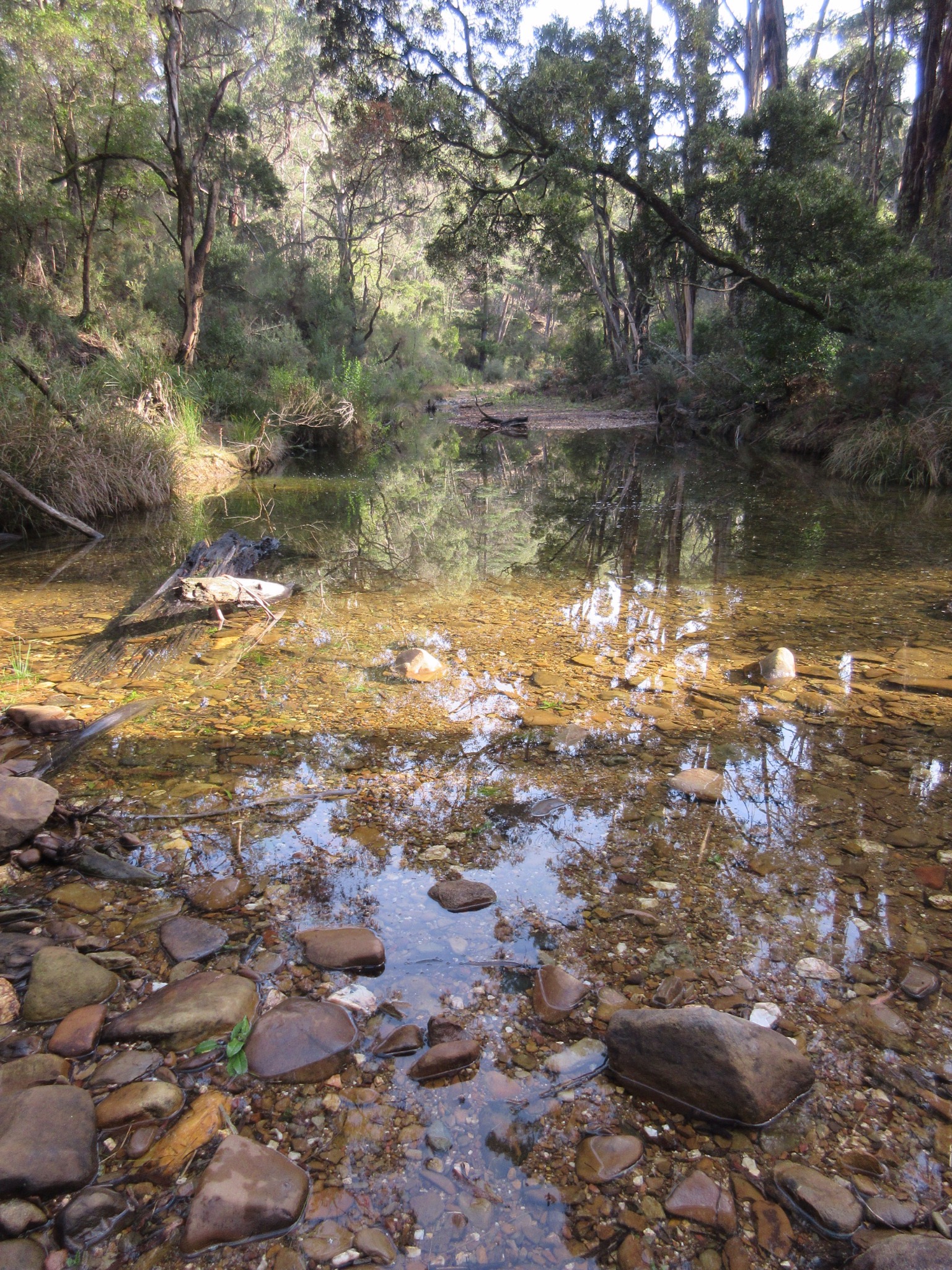 The Lerderderg River near Blackwood.

Trail markers indicating distances, heading back the way we came

Grasstrees made a surprise appearance 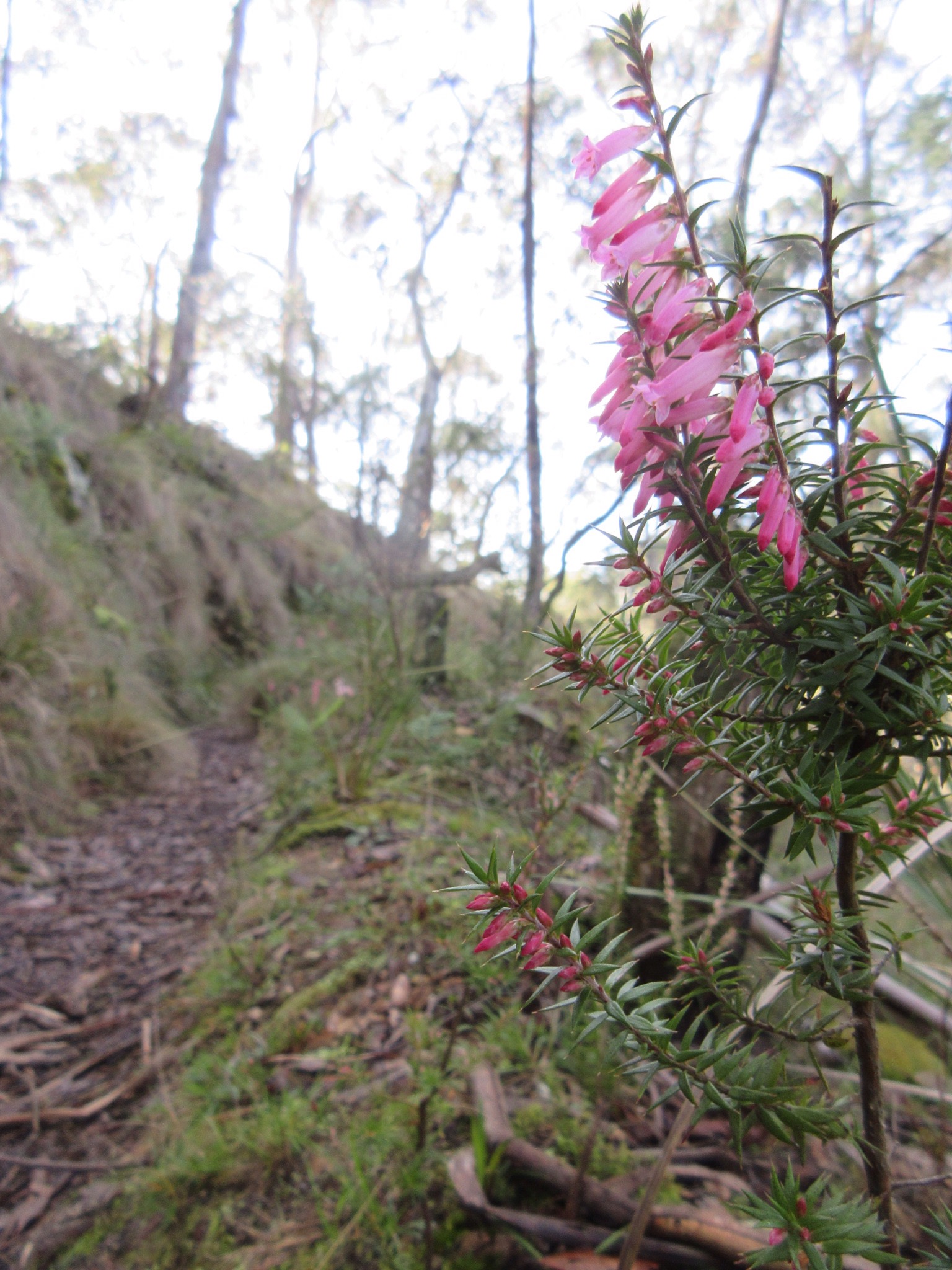 I didn’t realise until this walk that the common heath is the floral emblem of Victoria.

More beautiful mushrooms, among the moss on a fallen log by the trail. 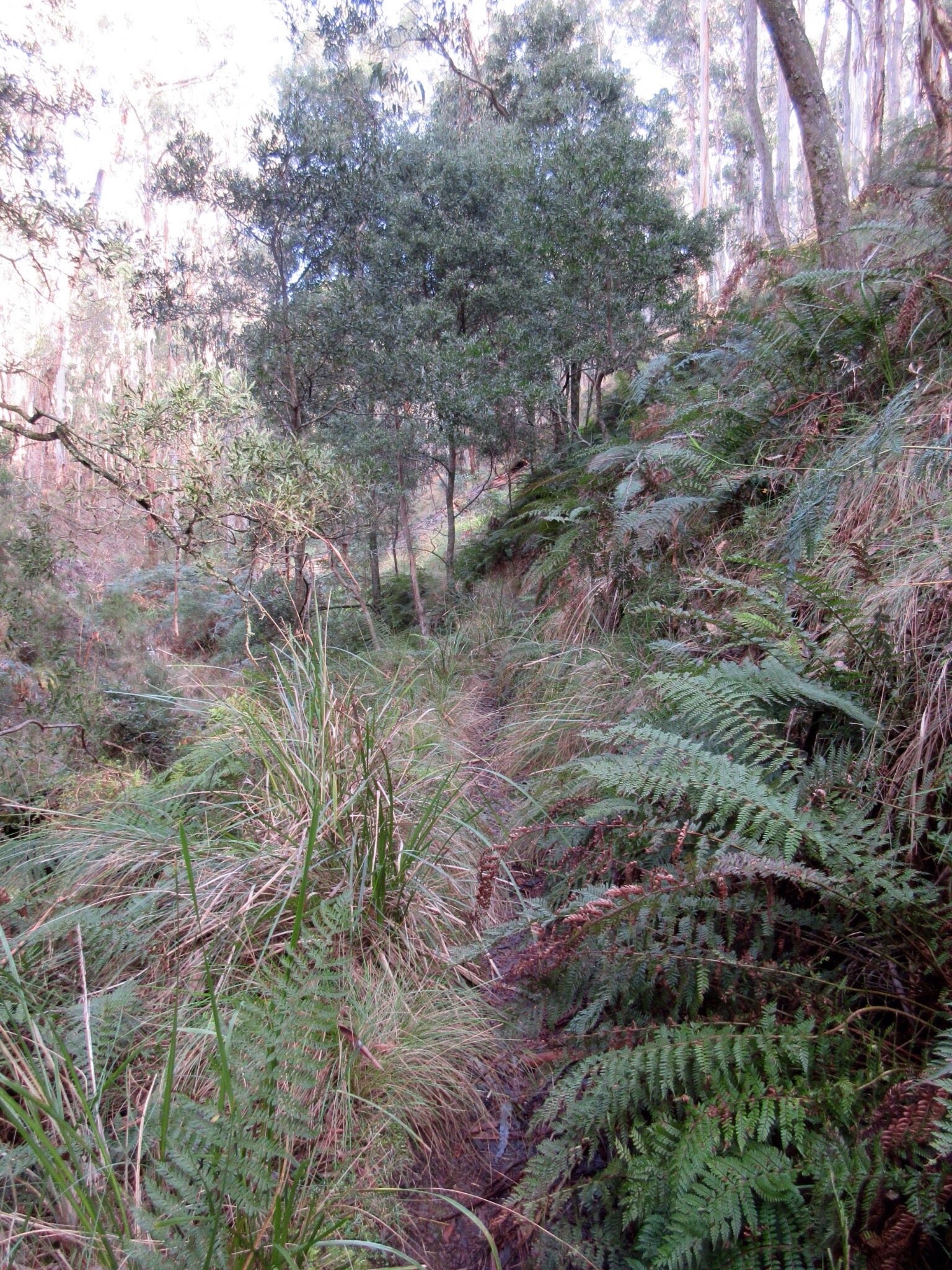 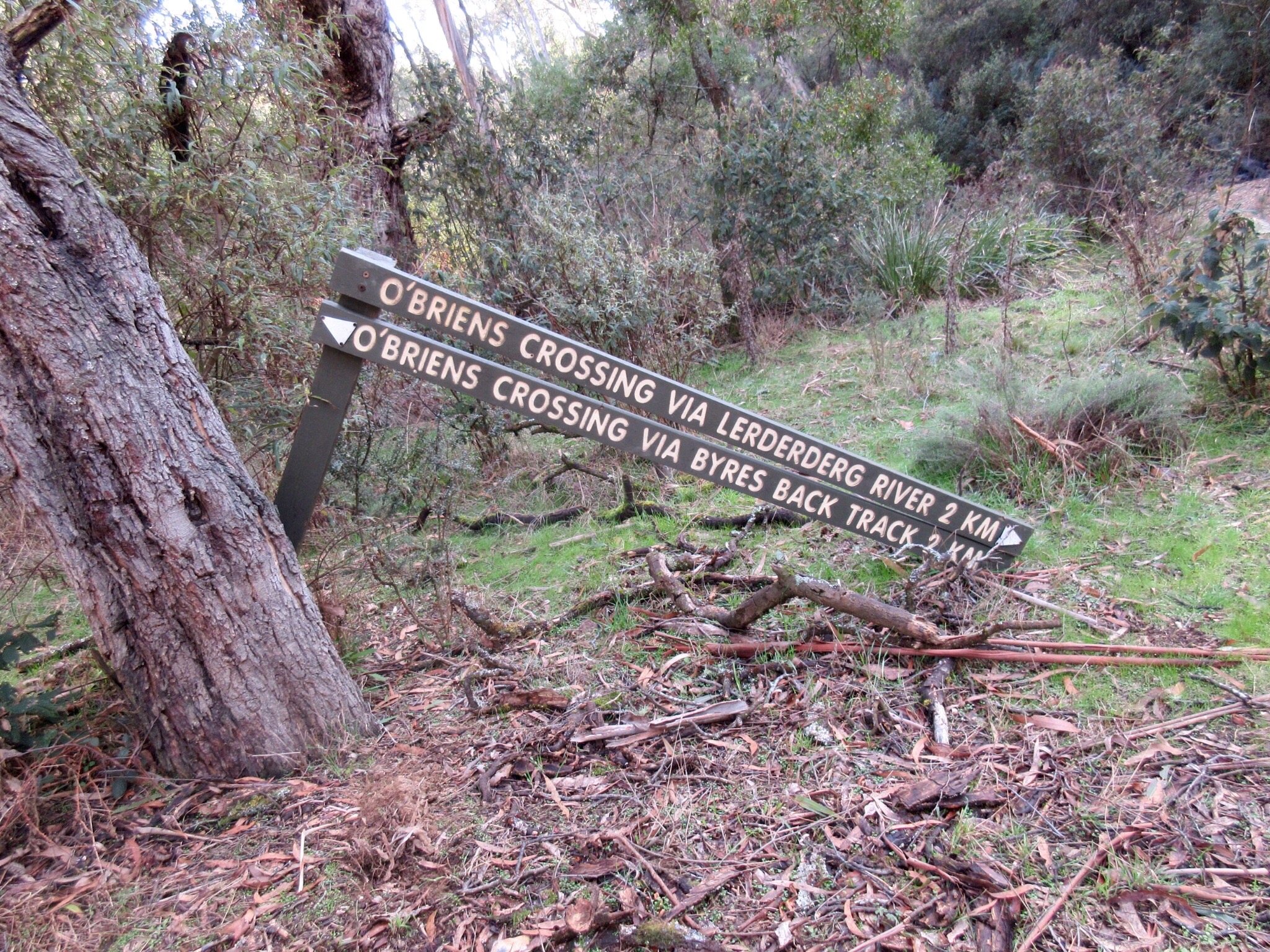 Wonky trail sign at the turn off to the Tunnel

Sick of fungus photos yet? These we on a log as we scrambled over the top of the Tunnel, maybe Calocera sinensis?

The Tunnel. A crazy old hole that miners cut to divert the course of the Lerderderg river. 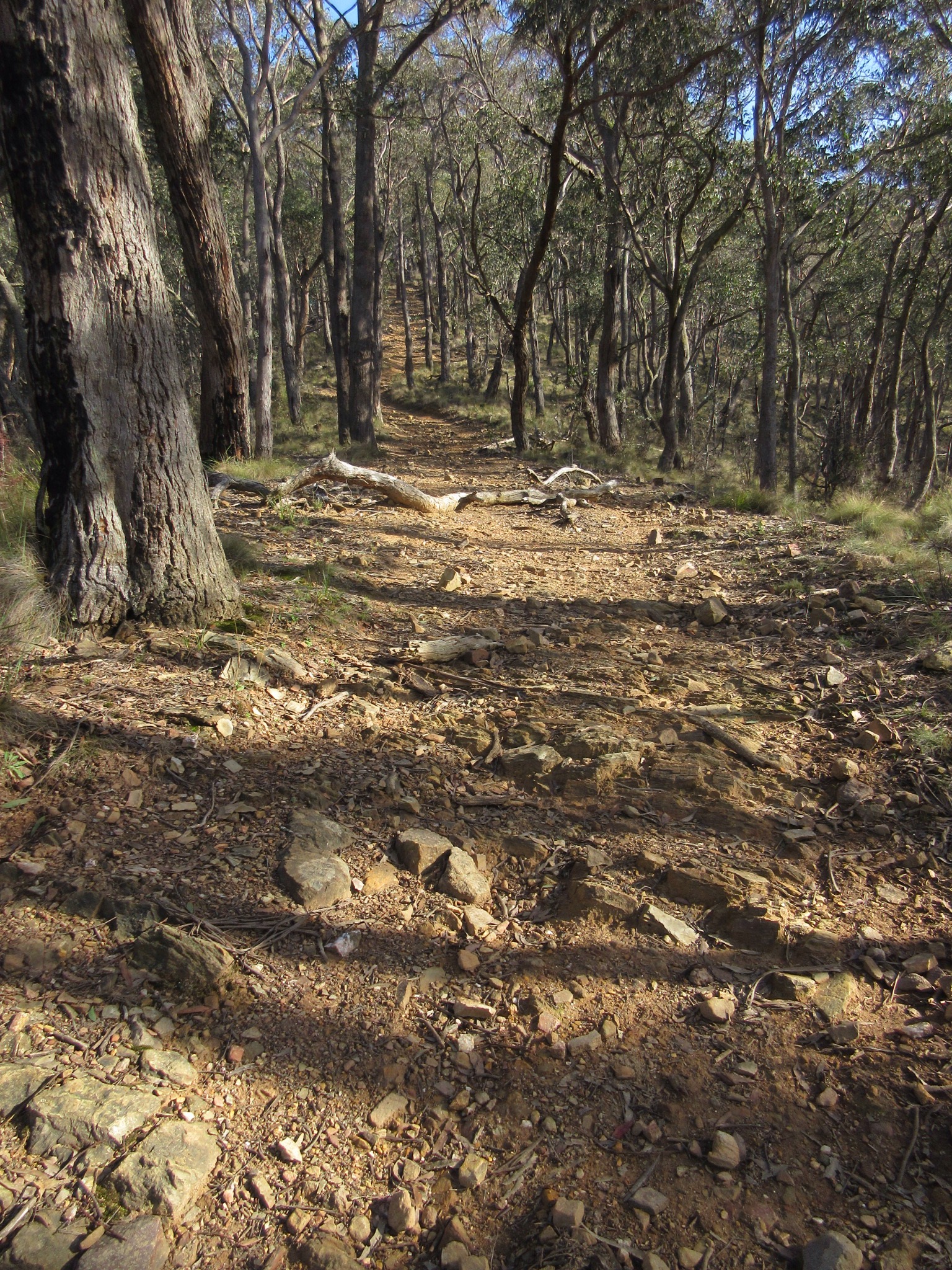 The four wheel drive track down to the Tunnel wasn’t much fun: steep and rocky. 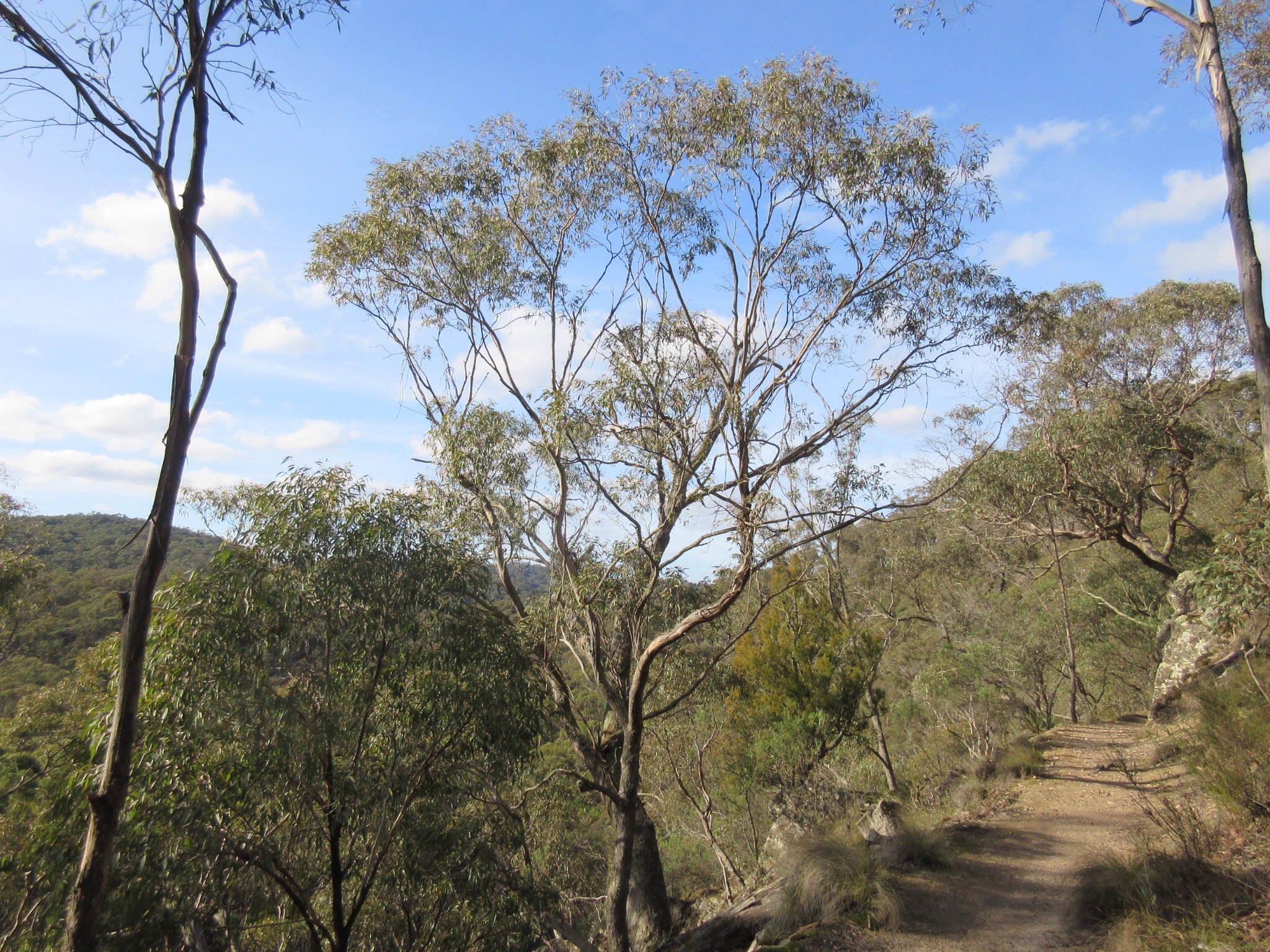 Back onto the main trail, and beautiful views across the valley. 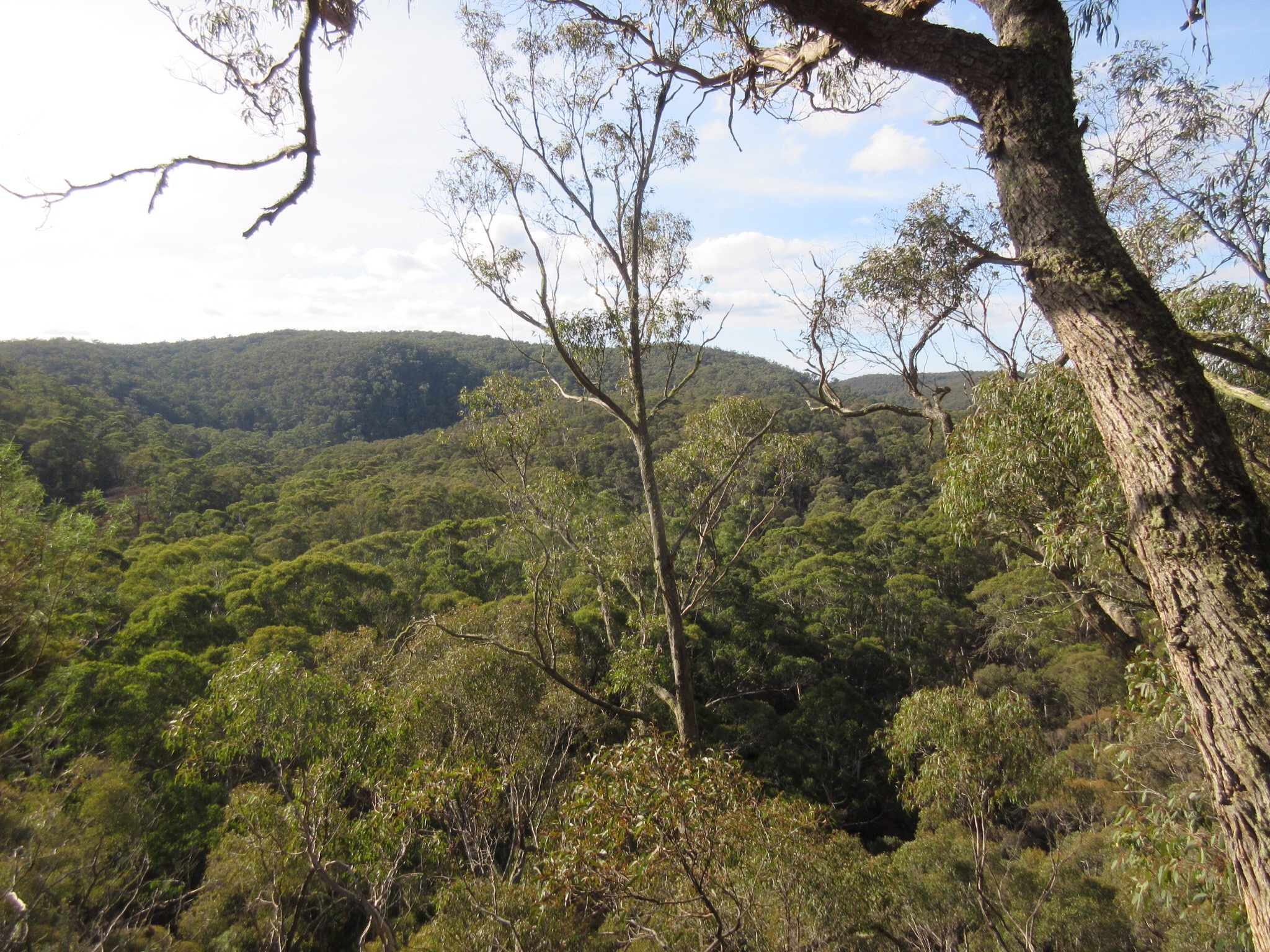 The tree-scaped valley in the afternoon sunshine 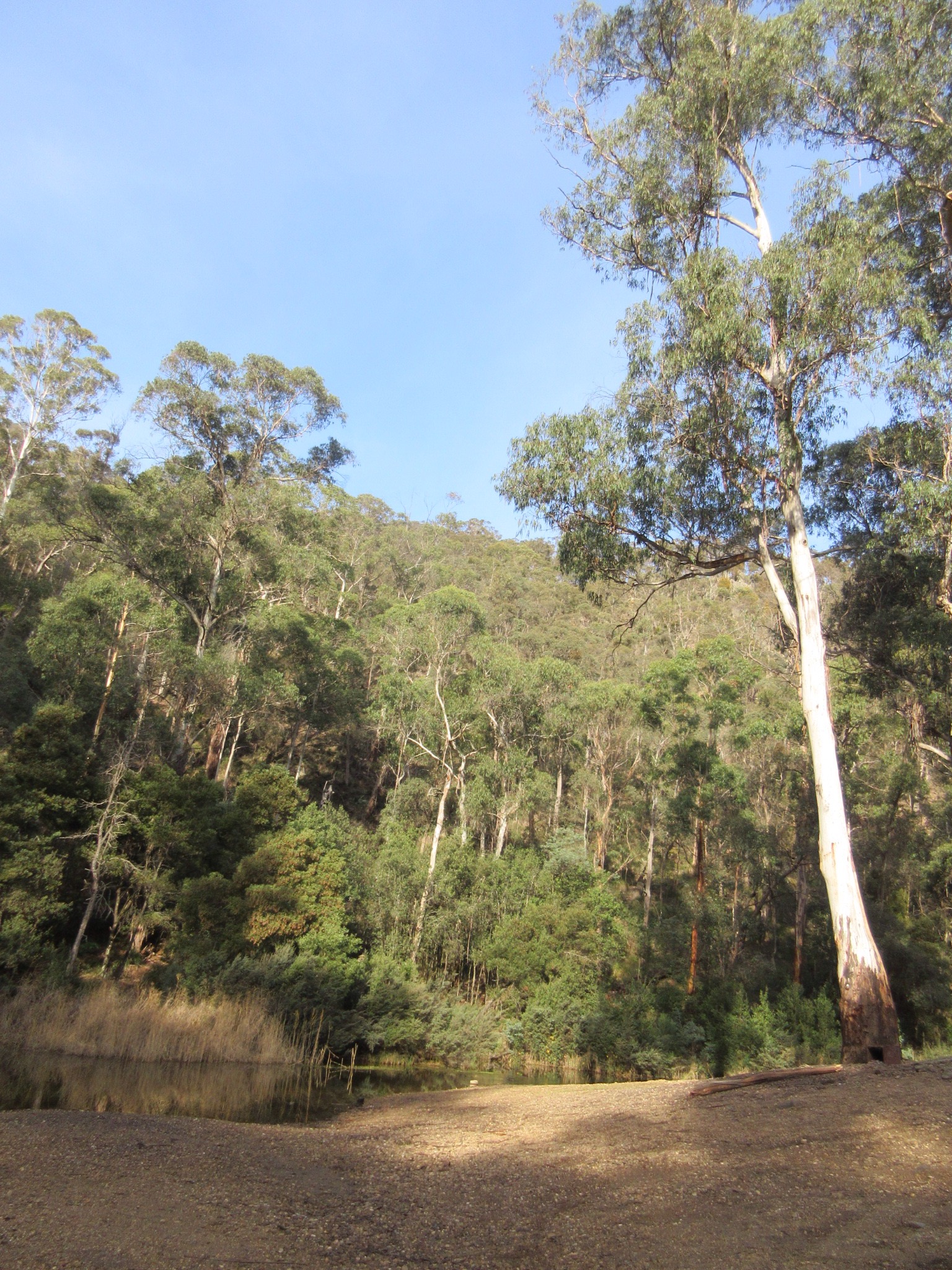 We were joined at lunch by a team of these! White browed scrub wrens.

When we went: Friday June 12
How we got there: we drove to O’Briens crossing in the Lerderderg State Park. It’s about a 90 minute drive from Melbourne via the M8. BUT we went via Trentham so that we could buy bread and have brekky at Red Beard before we set off.

Activity summary: around five hours of mostly easy walking in forest. There is a steep climb up at the start, and a short steep section down to the Tunnel and back. There’s a bit of rock scrambling at the Tunnel.

Anyway, we headed uphill, past the toilet block (smelly!) and up onto the track. The sun was out, the sky was blue, our breath fogging and roos were bounding away through the trees around us. It was a great morning for walking.

Once the trail levelled out at the top of the hill, it continued dead flat for most of the remainder of the walk, winding in and out of gullies as it followed an old water race, built for supplying water to the mining operations on the area. We marvelled at the condition of some of the stonework, the hand hewn cuttings and the flatness of the trail: built over 150 years ago and abandoned for over a hundred years. There were lots of signs of the gold mining days, but the forest had a charm, and some areas that have recovered enough to feel surprisingly untouched.

We weren’t paying enough attention on the way out, and missed our turnoff to the Tunnel. Despite featuring on distance markers on the track, the turn off itself (on the Gribble track) didn’t mention the Tunnel. Oh well, we were doing a return walk, so we just marked it down for the return journey!

The walk to Blackwood was a pleasant amble in the cool sunshine. We decided against going all the way into the town, so when we got to the Golden Point Road carpark, we wandered down to the Lerderderg river for a look. The river was beautiful, but the levels low. The area feels a bit too close to civilization too, lots of gorse an blackberries, and a 60s ish car rusting in the bracken by the track. We decided against lunch partly because it was still too early – so a handful of scroggin and some water and we started on the way back.

The journey back was just as enjoyable, the sun over our shoulder showed the forest in different light and shadows, and we noticed new views, birds and flora that we missed on the way out. A charming moment included a group of kookaburras calling very quietly to each other with muffled chuckles across the forest, causing us to pause and try to spot them in the canopy. After a stop-start exercise in triangulation, we found one sitting in an uncharacteristically inconspicuous spot high in the trees. Another moment we enjoyed was spotting a huge wedge-tailed eagle sail low across a break in the trees ahead of us. The cockatoos on the opposite side of the deep valley noticed only a few seconds later and raucously yelled in pursuit. The trees hid them as they screamed off in chase and faded into the distance.

Once again reaching the Gribble Track we headed down to the left at down the horrid, rocky, steep, slidy four wheel drive trail. At the bottom, the river was dry and a choke of old dead fallen trees was rammed up against a sheer rockface. There the trail scrambled up to the right of the deadfall pile and over the other side to where the opening of the Tunnel is visible. The geometry of the whole place was hard to work out at first, but the Tunnel blockage of trees is the clue. The river does a tight loop at this point, and there’s a huge tunnel cut at the narrowest point of the loop, cutting off the loop from its water supply. It’s well worth a look if you’re happy to do the scramble (or if you do a walk that comes from the other direction).

After the Tunnel visit, it was short rocky climb back to the track, and then less than an hour back to O’Briens crossing and the car.  We had a late lunch in our car at O’Brien’s crossing, and were joined by a team of cheeky scrub wrens, who even hopped into the car to see what we were eating! Obviously used to lunch time feeding….

The main problem I had with this walk was that I saw SO many different plants and fungi that I hadn’t seen before that I started to cross ‘that line’ of stopping too often to take photos 🙂 I’m still working through trying to ID everything, and I’m thinking it’s time to start collecting fungi/flora photos on a separate page here somewhere… Like I need more tasks for myself to fall behind on!

Birds we saw: One white eared honeyeater foraging up and down tree trunks, a black chinned honeyeater, a few red wattlebirds, LOTS of white throated treecreepers, quite a few kookaburras, heaps of sulfur crested cockatoos, a team of voracious white browed scrubwrens, a few superb blue fairy wrens, a few eastern robins, lots of crimson rosellas, various “little brown jobbies”, and one wedgetail eagle that was endlessly harassed by a team of cockatoos.

Yes, there were lots of birds on this walk.

Books: This walk is described as the Byers Back Track walk in Melbourne’s Western Gorges by Glenn Tempest, although he describes this as a one-way, three hour walk, rather than a return walk as we did it. A similar walk is also described in Day Walks of Melbourne by John Chapman et al, in the Byers Back track and Shaws Lake Walk. We will probably walk this loop variation next time. We will be returning!

6 thoughts on “Byers Back Track”